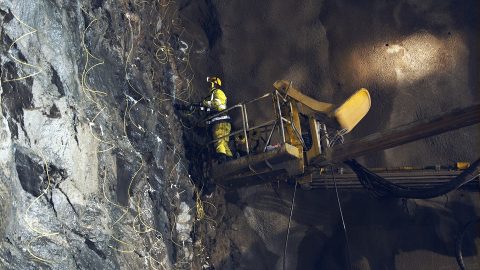 The expiring spring has become a crucial season for the Stockholm Metro. A considerable part of the blasting works started at all planned extensions of the Blue Line. In addition, Region Stockholm’s Extended Metro Administration chose Siemens Mobility as a contractor to electrify the new underground sections. Two other new metro lines are being planned for the construction in Stockholm in the coming period.

Despite the official ceremony for launching the construction works had taken place in March 2019, many activities at the sites started this spring, especially in April and May. For instance, only in the mid-May, the blasting works began at the construction sites of the planned tunnels on two extensions of the Blue Line, towards Söderort and Södermalm. “When the blasts at Sundstabacken have now started, this means that blasting works are being carried out at all new parts of the Blue Line: in Nacka, at Södermalm, in Barkarby and in Söderort,” Region Stockholm’s Extended Metro Administration reported last week.

According to the approved plan, the Blue Line of Stockholm Metro will be enlarged with four new sections: from Akalla to Barkarby (the Barkarby extension), from Kungsträdgården to Hammarby via Sofia (the Södermalm extension), from Hammarby to Nacka (the Nacka extension) and from Sofia to Sockenplan (the Söderort extension). As a result, the route will increase from the current 25.5 kilometres to 40.8 kilometres. The Barkarby extension is scheduled to be launched in 2026 while three other sections will be opened for the passengers in 2030. The entire project is valued at 32 billion Swedish kronor (more than 3 billion euros).

At the initial stage, the works will be dedicated to the construction of track tunnels and stations. Starting from 2021 on the Barkarby extension and from 2025 on three others, the key attention will be paid to the installations of electricity, signal systems, fire protection, ventilation, water and draining systems. The latest development in this regard is the deal between Region Stockholm’s Extended Metro Administration and Siemens Mobility. According to it, the German company will install the rail electrification system on all the extensions of the Blue Line and a planned section of the Yellow Line from Odenplan to Arenastaden.

The agreement, which is valued at 21 million euros, includes delivery, installation and commissioning of 15 rectifier stations, 28 network stations and a cable contract for fully operational installation. Each rectifier station should consist mainly of 36kV switchgear, rectifier units, DC switchgear 750V, control equipment and auxiliary power systems. The technical features of the network stations include 36-kilovolt switchgear, transformer 33/0.42 kV and control system. As for the 33 kV cables, they will be laid on the Akalla – Barkarby section.

Besides the mentioned extensions of the Blue Line, Stockholm Metro could be extended with two other routes. The construction of the new Yellow Line is scheduled to start this year and to be completed in 8 years. It will have a length of 4.1 kilometres and three stations (Hagastaden, Södra Hagalund and Arenastaden). The new route will be connected to the Green Line at Odenplan.

Another new line will run from Fridhemsplan to Älvsjö via Liljeholmen. It will have six stations: Fridhemsplan, Liljeholmen, Årstaberg, Årstafältet, Östberga and Älvsjö. The new route will enhance connectivity between the northern and southern suburbs of Stockholm as it will be linked with the existing metro network: at Fridhemsplan with the Green and Blue lines, at Liljeholmen with the Red Line. In addition, the new line will stimulate the development of new neighbourhoods in Stockholm: the city authorities plan to build 48,500 new homes close to the new line. The construction works will also start this year.