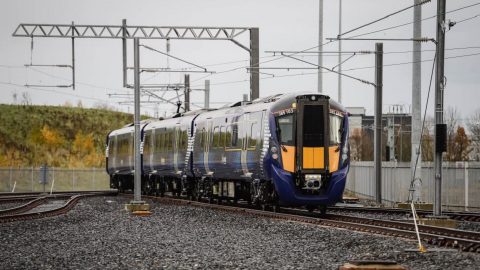 Transform Scotland, the Edinburgh-based association for promoting sustainable transport, has published its proposals to improve the inter-city rail connections in the constituent part of the United Kingdom. The recommendations are focused on the development of the rail infrastructure north of the Central Belt, the most populated area in Scotland. This will improve the competitiveness of rail services in the country.

Transform Scotland has unveiled its proposals on Thursday, 7 May, as a part of its response to the Scottish Government consultation on the National Planning Framework 4 (NPF4). In its argumentation, the association for sustainable transport stressed the lack of connectivity in the constituent country, especially north of the Central Belt (which includes, inter alia, Glasgow and Edinburgh). “In 1895, the fastest journey time between Edinburgh & Dundee took 59 minutes compared with about 64 minutes now – more than a century later,” the association stated.

Therefore, the organisation proposes to improve the rail infrastructure in order to facilitate and improve train journeys between Scotland’s cities. The first recommendation of Transform Scotland relates to electrification. “There is also a need to increase the extent of electrification on the Scottish network to allow a transition from diesel to electric traction with the resulting reduction in GHG emissions if sustainable power sources are used and in journey times. At the moment, only 25.3 per cent of the Scottish network is electrified,” the association explains. That’s why it calls upon the Scottish Government to electrify the northward railways from Edinburgh and Glasgow, via Perth, to Aberdeen and Inverness.

The next two proposals are dealt with track modernisation and construction. Transform Scotland advocates to add the second track on the single-track railways going to Aberdeen and Inverness. In this regards, the special attention should be paid to the Highland Main Line that connects Glasgow and Edinburgh to Inverness via Perth. This route is mainly single-track.

In addition, Transform Scotland proposes to construct a new direct rail line from Inverkeithing via Kinross to Perth. This will allow the railway operators to significantly reduce journey time for travelling from Edinburgh to Perth and Inverness. Before 1970, there was a railway line on the mentioned route but it was destroyed for road-building. The fourth recommendation relates to the development of national inter-city interchange at Perth railway station. This junction has a convenient location for the journeys from Inverness or Aberdeen to Edinburgh, Glasgow or further south.

Transform Scotland proposes to implement all the mentioned recommendations in three stages. By 2025, the association advises extending electrification from Dunblane to Perth. Within this period, there should be constructed more double-track lines from Aberdeen to Inverness and from Perth to Inverness.

The second phase comprises the period between 2025 and 2030. For these five years, Transform Scotland proposes to electrify the sections from Glasgow and Stirling to Aberdeen, from Edinburgh to Perth (including the construction of new stretches), from Perth to Inverness, from Edinburgh to Dundee. Also, the railways, which run towards Perth, should be converted to the double-track lines. Consequently, it allows the railway operators to create a new hub at Perth railway station.

The third stage will end by 2035 with finalising the construction of the second track from Perth to Inverness and from Aberdeen to Inverness (including the electrification of the latter route).