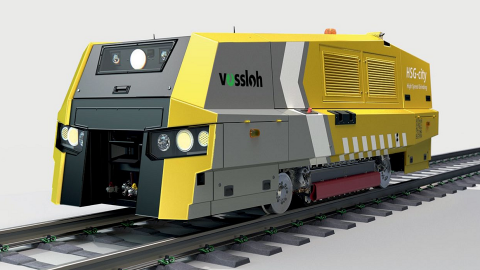 Tampere Tramway, a municipal company responsible for the construction of a tram network in the Finnish city of Tampere, has purchased an innovative grinding machine from Vossloh Group. It allows the company to provide the maintenance works on the future lines quickly, without traffic disruptions and at a minimum level of noise emissions. The trams in Tampere, the third-largest city in Finland, will start to run in August 2021.

Initially, the Tampere tram network will have two lines with a total length of 16 kilometres and 24 stops. Tampere Tramway has already ordered 19 light rail vehicles from Škoda Transtech, a Finnish subsidiary of Czech manufacturer Škoda Transportation. As for the maintenance works, the municipal company chose the HSG-city compact machine developed by the German supplier Vossloh Group specially for the tram networks.

“We want to be well prepared for the traffic. We were referred to a customer in Germany, where we were able to observe the HSG-city in action and see for ourselves the benefits in terms of extending the service life of rails,” said Ali Huttunen, a fleet manager at Tampere Tramway.

The HSG-city machine (High Speed Grinding) was designed and developed by Vossloh Group for grinding tram tracks. It is able to remove minor and median rail damage and prevent new defects. The HSG-city machine can perform the grinding works at a speed of up to 60 kilometres per hour. Another feature of the vehicle is its low level of noise emissions – between 3 and 10 decibels.

In addition, the machine has a special bunker for storying dust and sparks. This bunker allows it to perform grinding on the 30-kilometre section without its emptying. The HSG-city machine can be used on any types of tram tracks including those laying in the tunnels.