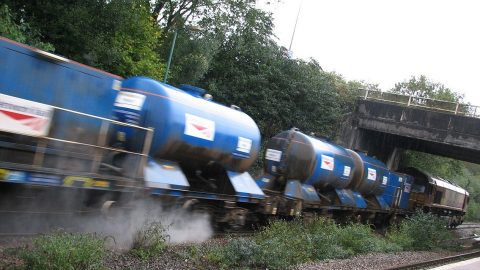 All the leaves are brown, and the sky is grey. So says the song, but unless you’re California Dreaming, commuters still need to travel, no matter what the autumn weather throws at the tracks. In Britain, that means leaves and lots of them. From leafy suburbs to Highland forests, it’s a natural phenomenon with which the railways have struggled to cope with since Stevenson’s Rocket first rattled the branches of line-side foliage. As is often misquoted, a British railway official once claimed that autumn delays were due to “the wrong kind of leaves on the line”. That’s a reason that’s largely been eradicated, with a squadron of specialist treatment trains deployed around the UK at this time of year.

Andy Thomas, Network Rail’s managing director, strategic operations, says that between the first day of October and 13 December, Network Rail receives adhesion forecasts twice daily from specialist weather forecasters highlighting locations requiring action. “This allows us to plan resources more effectively,” he says. “With millions of trees growing alongside the railway, it’s something the industry takes seriously. Our front-line teams are out there twenty-four hours a day to make sure we can get passengers from A to B safely and reliably.”

Particularly susceptible are lines in South East England, where third-rail power supply is widespread. That, however, doesn’t compromise the use of specialist equipment, including very high-pressure pumps. The leaf-busting trains clean the railheads with a water jet operating at 1,500 bar (1,480 atmospheres) or about 75 times more powerful than a domestic pressure washer. The spray blasts away leaf mulch, clearing the tracks and conductors, and helping signalling systems to function correctly. The work doesn’t finish there. The treatment concludes with an applied mixture of suspension gel, sand and metal shot, to aid traction. Similar solutions are also widely used in North America and Continental Europe.

Why the RHTT service is important for the UK’s rail infrastructure, source: Network Rail.

Although Britain rarely experiences the extremes of snowfall that might be considered normal in territories like northern Europe and America, the country’s widely varied regional climate presents unique challenges. In the mountainous parts of England, and throughout Scotland, icing is a problem for a much greater part of the year than elsewhere. On the Highland Mainline in Scotland, between Perth and Inverness, a unique adhesion train is deployed, often nightly, to coat the tracks with a paste of de-icer and grit, to give services the traction needed to climb the freezing summits, notably the 401-metre high Slochd Summit and the 460-metre high Pass of Drumochter. Not surprisingly, both peaks are above the tree line, and leaves are the least of the challenges faced in the winter months in a region where the climate is anything but dreamy and Californian.