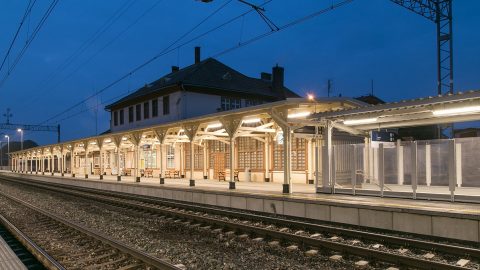 Polish rail infrastructure manager PKP PLK has installed 9,000 LED luminaires at the country’s train stations. This year the lighting will be upgraded at the stations in Katowice, Włoszczowice, Łódź Olechów Zachód, Rykoszyn and others. The LED lamps reduce costs and CO2 emissions as well as make railway platforms brighter and safer.

In 2018 the rail infrastructure manager has deployed 4,186 LED luminaires at the train stations of Warszawa Wola, Warszawa Koło, Warszawa Zachodnia (platform 8), Siedlce Zachodnie, Sabinka and others. The LED lighting was installed at the platforms, level crossings and pedestrian subways. “Railway stations and level crossings equipped with LEDs are brighter, and this increases the feeling of security. The more lit objects also have better protection against devastation and thefts,” PKP PLK noted.

PKP PLK launched the energy-efficient programme in 2015. Within it, the rail infrastructure manager is installing the LED luminaires at the train stations. The LED lamps have a longer life span. They are capable to function for 12 years, three times longer than the ordinary lamps. The LED luminaires, deployed in 2018, have already saved 750 thousand Zlotys (circa 175 thousand Euros).

LED lighting contributes to reducing energy consumption. The LED luminaires allow PKP PLK to save 3,000 megawatt-hours of electricity annually. This volume is equivalent to the annual demand for more than 1,300 households. Also, the LEDs help the Polish rail infrastructure manager to reduce CO2 emissions by over 2,300 tons per year. In contrast, it is estimated that 1 hectare of pine forest can absorb 20 tons of CO2 emissions per year.