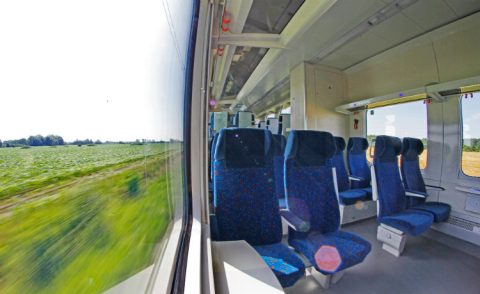 Czech Railways is extending the pre-sale period for reservations from closing two hours before departure to 30 minutes by means of a test for several train services, made possible by digital improvements and displays installed in passenger cars.

Closing the seat reservations 2 hours before departure was necessary because reserved seats had to be marked with paper tickets with the reservation on it. Tickets had to be printed and distributed to each seat. An eight-car train can have more than 500 individual seats and has a length of around 200 metres, which makes it a rather timely process.

Extending the advance sale period up to the last half hour before the train departs from the starting station is made possible by digital technologies installed in passenger cars that show the occupancy of seats on the displays for individual seats. The reservation data is automatically uploaded to the train and displayed on the displays at the right seats.

“We want to offer our passengers the widest possible range of services and fulfil individual customer habits. Some people buy tickets and reservations more in advance, other passengers choose to buy tickets and secure reservations at the last minute, and another group does not want to commit to a specific route and does not use the reservation of seats. The last two groups in particular will appreciate the change”, says Jiří Ješeta, member of the board of directors and deputy director general of Czech Railways for passenger transport.

For the faster Pendolino trains in the country between Ostrava and Prague as well as certain other trains, seat reservations are compulsory, which is possible because they are a commercial service, and are therefore a different story. Many other trains are part of a public service obligation which receive government subsidy, and a reservation is therefore not required. There is however the possibility to reserve a seat when buying a ticket.

After the reservation period closes, approximately half of the seats on the train are locked and only the seats marked as express reservations are available to the passenger, according to the Czech Rail Guide. Some trains already had a display at the seat, but the reservation system was not connected, so an employee with a flash drive had to upload the reservations to the displays above the seats.