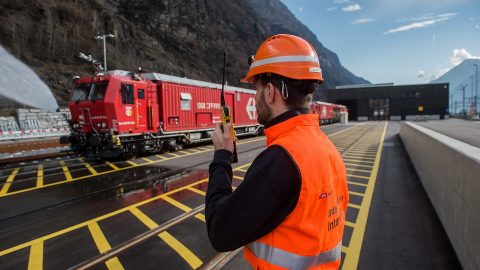 The RailTech Academy continues the online sessions. Its third course was devoted to the GSM-R. Eildert van Dijken, a Principal Consultant at Strict, has delivered an insightful presentation of this issue explaining its features, functionalities and the perspective of the future standard known as FRMCS.

“Usually I give the GSM-R course a whole day or even in three days but I try to give you some basics during these two hours. So you can also understand why certain things are happening,” Eildert van Dijken started his presentation taken place on Wednesday, 22 April. Initially, the lecturer reminded about different mobile frequencies that are available to the customers and their development (see the picture below).

From uplink to downlink

After making some notes about the components of mobile network, Eildert van Dijken presented a detailed brief of the relationship between ordinary GSM and GSM for Railways (GSM-R). “What is actually going on with GSM-R frequencies? They are located right next to GSM 900 frequencies which start at 880 megahertz for the uplink and 925 megahertz for the downlink. Actually, we have two different frequencies in a mobile network: for each connection, we have an uplink frequency (from your mobile phone to Base Transceiver Station) and a downlink frequency (from the antenna to your mobile). These two frequencies are linked, they allow your mobile to receive and transmit at the same time,” he said.

In his further explanation, Eildert van Dijken gave an interesting example for understanding what’s going on when using the GSM network. He compared this kind of network with a bus. “GSM is like a bus,” the lecturer said. “Each GSM frequency has eight places or time slots where somebody can do something. Therefore, in an optimal situation, you will be able to have eight calls on a single GSM frequency. This is called TDMA (Time division multiple access),” Mr van Dijken explained. At the same time, the Wi-Fi networks work in another manner because they do not such kind of limitations.

Eildert van Dijken has devoted around half of his course to explain the main principles of the GSM networks. “GSM-R is based on GSM,” that is the reason for such great attention that the lecturer has paid to this issue. He described the structure of the GSM-R with the help of a pyramid where a standard GSM functionality is its basis. The two other levels are the GSM enhancements for railways (Voice Group Call Service, Voice Broadcast Service, enhanced multilevel precedence and pre-emption) and the Railway specific functionality (it is abbreviated as EIRENE and includes functional addressing, location dependant addressing, railway emergency calls, high priority call confirmations).

The last point covered during the course was the future of the GSM-R. It is about the new Future Railway Mobile Communication System (FRMCS) standard based on the 5G network. “The idea behind FRMCS is to develop something new for railways with a more focus on the use of the network,” the lecturer said. He defined seven key challenges for implementing FRMCS: timetable, migration, frequencies, connectivity, interferences, infrastructure, the economy of scale. Currently, the European countries and dedicated associations are developing the new standard. “After 2024 we expect the first national FRMCS trials,” Eildert van Dijken concluded.