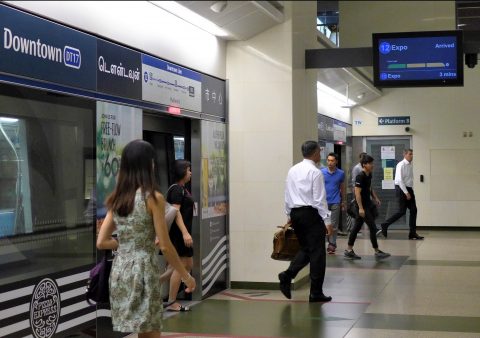 A system has been launched that displays how crowded certain parts of the train are on LCD screens at station platforms in Singapore. It is designed by Bombardier to allow travelers to enter the train in a different compartment that might have more seating capacity. The software solution is installed on the Singapore Downtown Line’s existing Train Control Monitoring System (TCMS). According to Bombardier Transportation, this technology maximizes the system’s operational efficiency.

The software solution has an onboard system which detects passenger weight load from the vehicle’s braking system and then sends the information to the passengers waiting at the next stop via a third-party vendor. LCD screens at the platform use a series of colors to indicate the capacity of each car: green represents a high probability of available seating, yellow for partially full and red for full. The implementation, which is the first of its kind in Singapore according to Bombardier, seeks to better distribute passenger load while also improving the trains’ efficiency and reliability.

The TCMS solution was part of a four-year collaboration between Bombardier and the Singapore Economic Development Board, which started in 2012, to develop a regional team to enhance software programing capabilities throughout Southeast Asia.