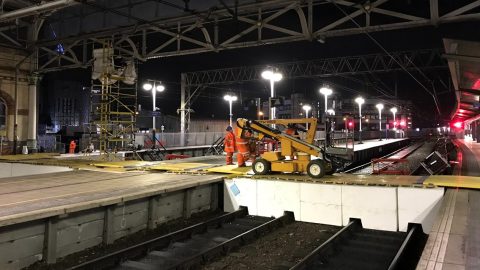 Published on 17-01-2023 at 07:03
Polystyrene platform at Manchster Piccadilly to bridge over tracks for maintenance of the roof Network Rail

Network Rail, the infrastructure agency for the UK, is no lightweight operator, but it has gone all flimsy for a quick fix to Manchester Piccadilly. Polystyrene platforms have been used to bridge the gap during roof repairs to the city’s main southbound terminus.

Passengers were advised of a full station closure at Manchester Piccadilly last Sunday when specialist teams carry out essential roof repairs. No trains ran on Sunday 15 January as the 25,000-volt overhead lines which usually power trains need to be switched off for engineers to work at height. Teams are continuing strengthening work to the Victorian-built train shed’s gable end which began over Christmas.

Station roof repairs are never an easy job, but the vast barrelled roof at Manchester’s Piccadilly (London Road when it was built in the late ninetieth century) presents special challenges. Just getting up to the apex of the roof – from the inside – demands some innovative thinking. It’s just that innovative thinking wasn’t expected to stretch to the sort of squeaky white stuff you find packed around your new TV. It’s enough to make your teeth grate.

Polystyrene blocks were used to bridge the gaps between platforms to build a temporary route along the width of the station so that mobile elevated working platforms could reach the roof structure. The remarkably squeaky stuff is actually remarkably strong when handled in the right way, so it made an ideal – and very light – solution to a perplexing problem.

A bus jam of rail replacements

For the repairs themselves, twelve ‘splice plates’ – which join the bottom chords of the steel trusses – are being replaced. The new units have been specially designed, so they are in keeping with the heritage features of the building. “We’ve been carrying out a lot of essential work to improve Manchester Piccadilly station”, said Kara Wood, Network Rail’s North West head of performance and customer relationship.

Unfortunately, trains could not run during the work, so Sunday was a bus jam of rail replacements outside the red sandstone building. Piccadilly’s station concourse and retail units stayed open, but passengers were directed to buses on Station Approach to complete their journeys. Piccadilly is not the only station in central Manchester getting a facelift. Salford Central is being spruced up, albeit without the help of poly platforms.