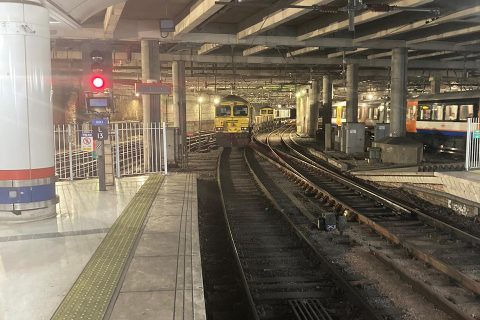 The Rail Accident Investigation Branch says a runaway incident at London’s Liverpool Street demonstrates the importance of drivers checking that their train is correctly secured before leaving it unattended. Moreover, that advice is especially important if working outside their usual routine. Their report is critical and says there are parallels with other runaway incidents, suggesting more attention should be paid.

An engineering train slipped its moorings during a possession back in October of last year. The Rail Accident Investigation Branch (RAIB), the UK safety watchdog, noted that a conflicting instruction to limit diesel idling within the station resulted in locomotive air brakes losing pressure and eventually failing. Liverpool Street station is largely enclosed by overbuilding and normally served by electric trains, hence the environmental concerns. No one was injured in the incident.

Just before midnight on Sunday, 2 October last year, an unattended engineering train ran away from London’s Liverpool Street station. The signaller was alerted to the train’s movement by track sections in the throat of the station unexpectedly showing occupied. The incident happened within a part of the station that was, at the time, under possession for engineering work on the station’s infrastructure. The unattended train travelled about 150 metres before coming to a stop within the limits of the possession. No one was injured, although the train damaged a set of points.

The engineering train, operated by Freightliner, had departed from Whitemoor Yard, in Cambridgeshire, in the late evening of Friday, 30 September and arrived at the station just after midnight on Saturday, 1 October. According to the RAIB report, the train comprised a class 66 diesel-electric locomotive (number 66955), three two-axle open box wagons, and another class 66 locomotive (number 66953) at the rear. The rear locomotive was shut down with its batteries isolated before the train departed Whitemoor Yard. The locomotive’s service brakes can remain operational in this condition. The train was to be used as part of work on the station’s roof during a weekend possession which included the closure of platforms 1 to 4 and the railway lines leading into these platforms.

Rolling and rocking to a halt

While the drivers had instructions about not allowing locomotive engines to idle for more than twenty minutes, there was no instruction in place relating to drivers starting up a locomotive engine to run its air compressor to replenish the supply to the train’s air systems. Consequently, the braking system slowly lost air over the weekend, allowing the train to roll away.

From where the train was left on platform 3 to where it stopped, Network Rail data shows a shallow falling gradient. RAIB calculated that if the train had applied no braking force, it would have rolled away on falling gradients for over 0.6 miles (1 kilometre) at speeds of up to 11 miles per hour (18 kilometres per hour) until it reached a rising gradient. The train would then have stopped and rolled back towards the station before running back and forth several times until it settled in a dip about 800 metres from the station.

The report into the runaway notes the station was quiet at the time of the incident. Liverpool Street is set to become busier overnight if proposals for expanding a trial light logistics operation bear fruit.

This article was first published by sister publication RailFreight.com.