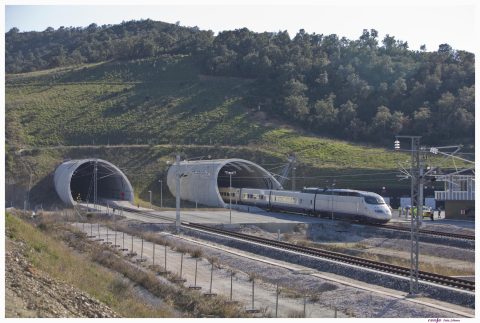 Published on 11-01-2023 at 16:01
Renfe high-speed train between France and Spain trough the Perthus tunnel Renfe / SNCF

Spanish national operator Renfe wants to once again operate trains to France on the routes Madrid-Marseille and Barcelona-Lyon before the summer of 2023, the operator says in response to questions from RailTech.com. After its cooperation with the French SNCF expired in December, Renfe obtained its individual certificate for operations on the two routes in France.

The high-speed trains on these routes were discontinued following the start of the pandemic. Before, they were operated by Renfe and SNCF in a cooperation called Elipsos, based on a commercial agreement. This came to an end on 11 December 2022 after SNCF last year decided to discontinue it, and now Renfe aims to restart services on its own on the routes, without SNCF.

With the Single Safety Certificate (SSC) for the operations in its pocket, which it obtained at the European Union Agency for Railways (ERA) on December 22, Renfe is one step closer to run trains to Marseille and Lyon. The certificate is valid on the French sections Perpignan Voyageurs – Lyon and Perpignan Voyageurs – Marseille Saint Charles, until 31 January 2027. French infrastructure manager SNCF Réseau has already established the train paths for Renfe operations in Lyon and Marseille, according to the Spanish operator.

In order to obtain the Safety Certificate, Renfe says it has had to overcome a multitude of requirements imposed by the French Safety Agency (EPSF). In France the requirements of the EPSF only allow obtaining the certificate to operate in specific lines, not for the whole network, meaning it cannot yet run trains to Paris, for example. Renfe earlier expressed interest in competing with Eurostar in the Eurotunnel, such as between London and Paris.

Meanwhile in Spain, the Safety Certificate allows operation on all the General Interest Railway Network (RFIG).
SNCF and Renfe have been rivals in Spain since the start of operations of Ouigo, a subsidiary of the French company, between Madrid and Barcelona. Renfe says it will continue to work to obtain the Safety Certificate to operate throughout France (as SNCF’s subsidiary Ouigo already has obtained to operate in Spain) and to be able to take advantage of the incipient liberalisation announced by the French State and SNCF.

Renfe’s objective is to start operations on the two routes in France before the summer. On the 16th of January, the operator will start test runs, which will reproduce the characteristics of the commercial service in order to demonstrate operational solvency. At the moment, Renfe already has the first train drivers trained, and this training process for operations in France will continue until mid-April. The Operations Management Centre will be located in Barcelona.

The start of commercial operations in France will happen in two phases. In the first phase, there will be services on alternating days, with the possibility of 6 weekly circulations between Madrid-Marseille and Barcelona-Lyon. In the second phase, there will be services every day of the week, with two trains per direction on both routes, with a total of 28 trains weekly.

One-sided end of the cooperation

SNCF’s announcement in February last year to break up the company Elipsos was a one-sided decision from the French side. Renfe officially informed SNCF that it did not share the reasons put forward for dissolving the company, saying there is an expectation of recovering international demand on the routes, which has been weighed down in the last two years by the coronavirus pandemic.

The Renfe-SNCF cooperation began in 2013 with the launch of the first high-speed international connections in a commercial agreement between the two operators. Initially they offered four routes: Barcelona-Paris, with SNCF TGV Euroduplex trains, and Barcelona-Lyon, Barcelona-Toulouse and Madrid-Marseille, all with Renfe 100 series trains.

Since the start of the pandemic, however, only the trains linking Barcelona with Paris and Barcelona with Lyon have been running with one daily train in each direction. SNCF is only keeping the services between Paris and Barcelona in operation, the most successful Renfe-SNCF cooperation, said an executive of SNCF Voyageurs to French newspaper Les Echos in February last year. The French operator thus did relaunch its high-speed service between Paris and Barcelona on its own under the TGV InOui brand with the timetable change on December 11. Two services are still provided daily in each direction, and a third pair of trains will be introduced in summer 2023. The lack of profitability of many of the other services would be behind the decision to not continue operations on the other routes by the French state rail operator, which “does not want to continue losing money”.

According to Renfe however, at the last meeting of the Board of Directors of Elipsos, the directors analysed a preview of the results, which show an operating profit in 2022. SNCF took the decision to liquidate the partnership with Renfe once its high-speed service Ouigo was already consolidated in the Spanish railway market. Thus, the Spanish operator concludes that SNCF knew that they could operate alone and Renfe could not yet, calling it an “exclusively strategic decision” to end the cooperation.

Renfe also notes that SNCF’s decision to break up the cooperation with Renfe could have been detrimental to traffic from Figueres to Girona and Barcelona, since the elimination of the Elipsos services (which have not operated since 11 December) would reduce traffic on the line Figueres-Barcelona Renfe has adapted to this situation is replacing the frequency that SNCF is abandoning. Renfe maintained the frequencies on its own with 13 trains in each direction.

No plans for night trains

Until 2013, there were night trains running between Paris and Barcelona, however even though sleeper trains are getting more popular and gaining traction again, both SNCF and Renfe do not seem eager to run nightly services.  “If demand grows on the route Barcelona – Paris, we would prefer to add new high-speed frequencies rather than a night train,” said Jean Baptiste Guenot, SNCF’s director of international development to Lavanguardia.

The operator has greatly reduced its number of nightly trains over the last decades. One still existing is the Intercités de nuit between Paris and Latour-de-Carol in southern France, just on the border with Spain. “Those that circulate (such as the one from Latour-de-Carol) is because they have subsidies, a financial balance has not been found for them and we do not consider it pertinent to open new routes if there is no public aid to make it possible”, said Guenot. Renfe has also no night services listed for its plans for cross-border operations between Spain and France.

Last December, several organisations among which the European Passengers’ Federation and the Iberian Railway Alliance voiced their concern about the lack of rail services between France and Spain. The high-speed Figueras-Perpignan line between France and Spain through the Pyrenees via the Perhus Tunnel is relatively new, and saw an infrastructure investment of 3.500 million euros, partly funded by the EU. It is however barely used today, say the French and Spanish organisations.

They called on the national governments and rail operators of both countries to maintain the existing services, reinstate the Barcelona-Toulouse services, reopen the Paris-Barcelona, Paris-Madrid and Lisbon-Hendaye night trains and increase cross-borders regional services between Perpignan and Figueres. With Renfe planning to reinstate more services to France, at least some of this call seems to be answered.

Also no services between Spain and Switzerland as yet, none from Spain to Germany. Probably RENFE has no adequate trains, neither for night nor daytime services to Germany, but SNCF possibly does.
Adding the direct trains’ traveltime of 8 hours from Frankfurt to Montpellier and 3 1/4 hours from Montpellier to Barcelona would be rather attractive, particularly at night, but not so with detours through Paris (with change between stations) as currently required.