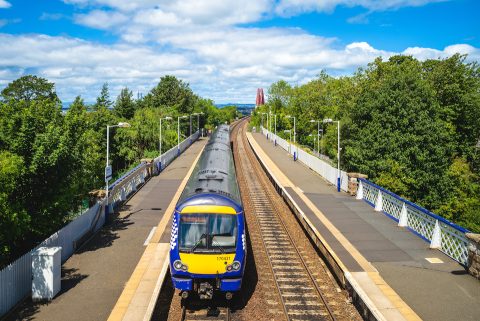 Published on 19-12-2022 at 09:17
Scottish passenger train at platform with iconic Forth Bridge in background Railway Industry Association media centre

The Railway Industry Association (RIA) has welcomed the Scottish government commitments to sustaining rail funding in their recent budget statement, made to parliament in Edinburgh earlier this month. The representative body also applauded the statement of intent outlined in the publication of the second Strategic Transport Projects Review (STPR2).

In line with the Scottish government’s commitment to a net-zero economy by 2045, the acting finance secretary and serving deputy first minister John Swinney delivered the Scottish Budget, which committed to a sustained level of funding in 2023-24 to maintain, operate and decarbonise Scotland’s rail infrastructure. The statement delivered to the Scottish parliament in Edinburgh pledged to invest over 1.4 billion pounds (1.67 billion euro) to maintain, improve and decarbonise Scotland’s rail network. The deputy first minister claimed this would ensure that critical infrastructure continues to serve the needs of the people of Scotland.

At a RIA Scotland Leadership Group meeting, industry leaders discussed second Strategic Transport Projects Review (STPR2), which they say will provide clarity for the industry, and the imminent publication in January of the High Level Output Specification (HLOS) and the Statements of Funds Available (SoFA), which will set out the funding Network Rail will receive from the Scottish government for the period from 2024 to 2029.

“The budget announcement sustaining funding for rail around capital spend is very much welcome, as is the publication of STPR2”, said Meirion Thomas, Chair of RIA Scotland. “Certainty and clarity are key to the success of the rail supply sector, so it is beneficial to understand which transport investments are being prioritised.”

Action to match the words

In addition to the proposed investment in the rail network, the industry in Scotland is encouraged to see other commitments to rail-based development in Scotland. “ It is encouraging to see a commitment to light rail and metro in STPR2, namely the recommendation to progress with the Clyde Metro [around Glasgow], along with Edinburgh and South East Scotland Mass Transit”, said the RIA. “A focus on the importance of the integration of rail with other methods of transport is also welcome, as is the recommendation to provide capital funding to support pilot schemes and demonstration projects for Mobility as a Service.”

There is still a considerable case for even more investment in the Scottish railway network, with many calls for greater implementation of rail freight access across the country. “It is now key for the action to match the words”, says the RIA. “These innovations need to be implemented, rolled out, and scaled up. We look forward to the publication of the HLOS and SoFA in early January, which we are hopeful will sustain current levels of activity. Maintaining this investment will allow suppliers to invest in their businesses, drive efficient delivery and ultimately power economic growth.” Quoting the Oxford Economics’ report on the economic contribution of rail, the RIA claimed that every pound invested in the railway delivers two and a half times that in wider economic benefit.

Quantity matters – if high quality is ensured…
Accordingly, at other fellow modes, where robustness (resiliency and redundancy) – by nature – is present, there decisively quantity is provided – and paid for.
Primarily, above – bottlenecks of Industry – have to be attended!
Low price infrastructure, optimal, when steam was outed, no longer is! Repairing (“maintenance”) has become too costly.
Safe, calculable…, margins, above the allowed, 22,5 ton axial load, has to be provided for, etc.