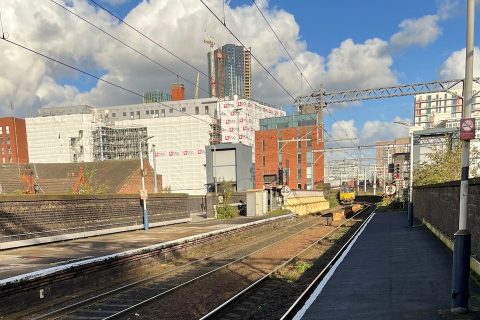 Published on 02-12-2022 at 10:30
Salford Central station from the platforms looking towards the skyscrapers of Salford and ManchesterNetwork Rail media centre

Salford Central, the forgotten hub of Greater Manchester, is to be given a facelift and overhaul by Network Rail, but will close for up to six months in 2023. The work will restore some of the station’s former glory, but falls far short of restoring it to the traffic handling capacity it once enjoyed. The station lies within a few metres of the civic boundary with Manchester, and provides relief for other overworked city centre stations, including Manchester Victoria.

Network Rail, the infrastructure agency for Great Britain, is investing 7.3 million pounds (about 8.8 million euros) in what they are calling a major station overhaul for Salford Central. The six-month renovation will see platforms modernised, roof canopies repaired, and some work to track and signalling. However, there are no plans to reactivate a pair of disused platforms on the westbound lines, which would provide more capacity for services to access lines towards Liverpool. That side of the station will remain freight only. Work gets underway in the first days of January.

The underwhelming experience of Salford Central will see improvement works begin on 2 January, and run through to Summer 2023. According to Network Rail, the much-needed station improvements will provide a better travelling experience for passengers and improve train reliability across Greater Manchester. The investment, although welcomed, is tiny in comparison to projects serving similarly sized communities elsewhere in the UK. The two platforms that remain in current service will be raised, meaning ramps can be used to make all services accessible for disabled people for the first time.

A pair of platforms on the south side of the station were taken out of service several decades ago, when Manchester Exchange station was closed, and the tracks diverted to Victoria. Those terminals were so close to each other that a famously lengthy platform was shared between the two Manchester stations. Traffic on the ‘Exchange’ lines, principally connecting with Warrington on the West Coast Main Line, and onwards to the west coast port of Liverpool, are now concentrated on the remaining two north side platforms, causing a bottleneck reminiscent of the infamous Castlefield Corridor that constricts traffic westbound from Manchester’s other main terminal, at Piccadilly.

Freight should be unaffected

While passenger use will not be possible during much of the works at Salford Central, traffic should be able to use the lines. Freight in particular should be unaffected. The former ‘Exchange Lines’ remain accessible via connections, including the recently built Ordsall Chord, permitting east and west flows. Passengers will have to make do with a peak time bus, running every 15 minutes between Salford Crescent, Salford Central and Manchester Victoria. Given the traffic conditions in central Salford and Manchester, able bodied passengers may well elect to walk. The peak hours only provision suggests Network Rail anticipate most others will use Manchester Victoria instead, less than a kilometre away.

“Because the work means we must close the station for six months we wanted to make people aware of the improvements to come”, said Joanna Fielding, scheme project manager for Network Rail. “This package of improvements for Salford Central will benefit the thousands of passengers who use the station each year and make it much more accessible.” Her colleague, Chris Jackson, regional director at Northern, the train operating company that manages Salford Central, noted that the station’s 184 years of service had taken its toll. It had originally been opened as a terminus, before a bridge over the River Irwell permitted connection of Salford and Manchester. The waterway and the civic boundary being reasons for the historic proximity of the station to adjacent Manchester’s terminals.

“I’m delighted to hear this essential work will begin in the new year”, said Paul Dennett, the appointed City Mayor of Salford. “Salford Central is at the heart of our New Bailey business district, and needs this investment to make it truly accessible and fit for the twenty-first century.”

The elected mayor for the ten civic boroughs that comprise Greater Manchester, Andy Burnham, put a wider perspective on the improvements works. “All of our city centre stations need significant investment and we have made the case for this. I’m pleased to see improvements being delivered in Salford [Central], and I hope to see this mirrored across our region’s other railway stations.”

Manchester is in line to gain another new terminal in the coming decade. Assuming HS2, the high speed rail project, is completed as far as the city, the former Mayfield terminal, adjacent to Piccadilly, will be transformed into the region’s HS2 destination. Through running to Salford Central is not anticipated, although there are those two abandoned platforms. Even Salford Lads consider that a pipe dream.