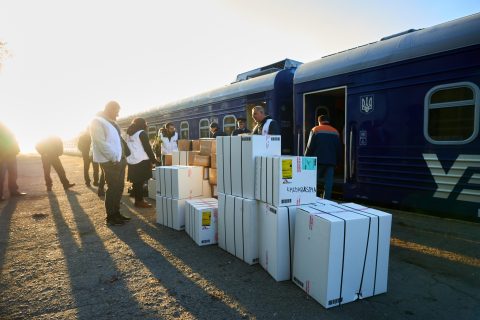 Running trains amidst the war in Ukraine: ‘We are hell-bent on making trains run on time in times of chaos’

Published on 22-11-2022 at 12:36
Ukrainian Railways transported MSF doctors and medicine to the liberated Mykolaiv Alexander Kamyshin

From a regular railway operator transporting people and goods, Ukrainian Railways became crucial in assisting the people of Ukraine via evacuations, transporting medical equipment, and by bringing foreign leaders into the country delivering their support. “We never imagined the role that the railways would play”, says Oleksandr Shevchenko, Deputy Director for Communications and Customer Experience at the Ukrainian Railways passenger department, in Amsterdam.

“Railways have become the backbone of logistics during the war in Ukraine. We have a habit of thanking world leaders who come to Ukraine for choosing Ukrainian Railways, but then you pause because really there is no other way to get here. We never imagined the role that the railways would play”, says Oleksandr Shevchenko, who travelled to Amsterdam to join the World Passenger Festival last week with a keynote interview on the stage, and afterwards spoke with RailTech.

Ukrainian Railways transported more than 200 delegations of world leaders and diplomats to Ukraine, which they dubbed ‘iron diplomacy’. The rail operator also transported wounded people and evacuated more than 1 million children since the start of the war.

“Basically everything in the country is now transported via rail”, says Shevchenko. “The first thing to happen after an area is liberated is de-mining, but after that come the trains. They bring food, electricity in the form of charging points for in the stations, and the railway stations become the rallying point for the local community. The railway is something that connects the devastated liberated Ukrainian cities to civilisation again.” For example, in the recently liberated city of Kherson, the railway station was the first building with working electricity.

When in February 2022 Russia invaded Ukraine, it was a chaotic time and the railways and its employees had to step up. “During the first few weeks of the war, we were running on pure adrenaline. In the first phase, we had to get as many people out as possible. 3 thousand people would travel on a train that would normally accommodate 600 people. We saw children travelling on food carts along the tracks, it is really something I wish no one has to experience”, Shevchenko tells the audience in Amsterdam.

In the later stages, the efforts of the railways became more and more structured, explains Shevshenko. “We started the systematic evacuation of people who could not evacuate themselves, such as elderly or disabled people. We have separate trains for the wounded, basically hospitals on wheels, and all of this needs a structural approach. In a normal situation, we would have a month just to prepare for bridge repairs. Now, we had eight days to establish a hospital train, and 30 days for rebuilding an entire bridge, those are time schedules that are not typical for railways.”

To keep the trains running, many repairs need to be carried out. “The railways were – and still are – getting shelled everyday”, says Shevchenko. “What we do is to try to make sure that the rail is ‘rideable’ around an hour after getting shelled. Luckily, Ukraine has a wide railway network, so we have extra routes and the dispatchers can reroute trains on the way, and the speed of trains are adjusted. We are hell-bent on making the trains run on time. In times of chaos, there is something that needs to be stable and predictable, and the railway is undertaking this role. Our trains have kept up an 85 per cent punctuality rate.”

Next to damaged tracks, the Ukrainian energy infrastructure was also a target of Russian attacks, with nearly 30 to 40 percent of the countries’ energy system destroyed, said President Volodymyr Zelensky in the beginning of November. How does this influence the rail operations? About half of the trains in Ukraine are operated on electric power, namely all the intercity and high-speed trains as well as most of the suburban trains, Shevchenko told RailTech.

“We usually keep several diesel locomotives in the depots in all the regions, just in case. If everything gets shelled they can pick up a train and continue on diesel power. Right now, we luckily still have more or less enough (electric) energy to continue operating with the electric powered locomotives, but if a catastrophe happens, we have some diesel-powered backup trains. In other cases we will have two trains run as one with one locomotive and then split up for the final mile.”

Maybe some cancellations would have to be made, but that would be the very last measure, says Shevchenko. He points out that until now, not a single train has been cancelled since the beginning of the war, except when a station was bombed or a similar large catastrophe.

Earlier in November, the head of Ukrainian Railways Alexander Kamyshin shared videos of running a steam train, as a ‘plan B’ to the backup diesel locomotives for rail operations. Although this was mainly meant humourously, according to Shevchenko, there is in fact at least one steam train that can run on the standard Ukrainian railway gauge, and two that can run on narrow-gauge lines. These trains are normally used for entertainment purposes, such as with Christmas. “I don’t think it is the most practical to use them for evacuations, but we will use them with Christmas also this year, as there is no reason not to.”

In fact, things that normally seem unusual or unexpected for the railways to do are more common in the war time. “This summer we have been preparing for winter already, and we started making small stoves, devices for heating in emergency situations. Instead of just repairing old trains cars, our train depots were busy making all those heating devices for the Ukrainian people, for use in apartments, stations, anything. We just had the metal and knew how to do it”, says Shevchenko.

“No one would have thought two years ago that we would be busy making those heaters, but we did”, says Shevchenko, emphasising that the tasks of the railway company are much broader than usual. “We have to be inventive, if anything out of the ordinary happens and when it’s a situation of life and death. When we run a train to areas close to the war, we switch off all the lights in the railcar, and we remind people that it is safer to lay on the floor. We do everything necessary to get people from A to B if their lives depend on it. So if we would need the steam powered locomotive to move wounded people out of the war zone, we will do it. We will run with horses if we have to.”

As for the needed inventiveness and quickness to respond to new situations, something else that Shevchenko and the Ukrainian Railways had not expected beforehand was how many pets people would bring on the trains when leaving areas of Ukraine. “We transported over 112,000 pets. Normally, transporting a dog is not a problem, but sometimes we had the cabin crew of the train riding with like seven puppies running around, it was a challenge but we understood that we also needed to accommodate that.”

Next to running trains on time, the other focus of Ukrainian Railways is on comfort and quality of the service for the passengers, a focus they already had before the war. “We try to make Ukrainian railways as family-centric and child-centric as possible, so we organise on-board cinema, and have paintings for children on trains. We also have playgrounds on stations, and even now in bomb-shelters on the stations.”

If there is one learning from the war period, it would be that you have to take decisions, says Shevchenko. “A bad decision is better than an untaken decision, because if you ponder on a question and do a public opinion poll for too long, you might get shelled. You don’t have the time for that. We need to be fast and take responsibility.”