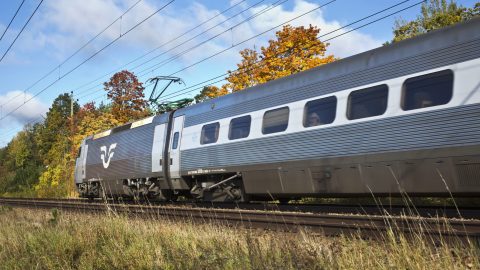 After several years of track work on the Norwegian side, Swedish operator SJ will resume the cross-border trains between the capital cities Stockholm and Oslo from December 11. There will be five departures in each direction on weekdays.

More than half of the departures will be by express train. “With the fast and comfortable trains, you can travel between the capitals in just over five hours”, says Martin Drakenberg, business manager at SJ.

During the summer of 2023, there will again be tracks works, this time in Sweden between Laxå and Kristinehamn. Trains between Stockholm and Oslo will continue to run, but due to the planned works the trains will be rerouted and have a longer journey time. More detailed information about the reroute will be announced in the spring, says SJ.

“After a long time with various track works on the route, this will actually be the last major work, and we are very happy that we can now invest long-term in this both important and popular train line”, says Drakenberg. Tickets for the train service are already available since 9 November.

Regrettably, proved now it is, that sophisticated boogie technique, can not compensate for inferior, at basics, at infrastructure…
Short of as well robustness, as resilency and redundancy – at Release revealed…, simply railway neither afford, anything but the optimal!
Even worse, current short comings of Industry, now plaguing IM:s and clients, not sustainably are used, as excuses – for extras, “steering”…, imposed service rendered by alternative mode…
A New Old Railway is needed!