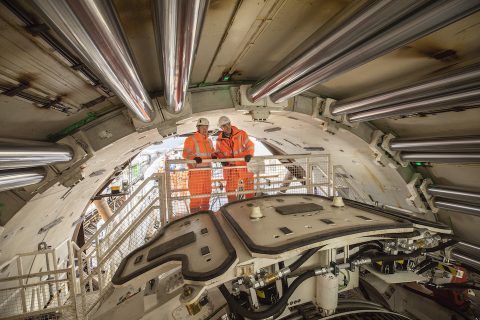 HS2, Britain’s high speed rail project under construction between London and the Midlands, has launched its second tunnelling machine underneath the streets of the capital. Above them, the company has announced its workforce has hit 30,000 personnel, supporting the biggest civil engineering project currently underway in Europe.

The company building Britain’s high speed railway has made good on its promise, and launched the second tunnel boring machine (TBM)  under London. After ‘Sushila’ set off in September, her twin sister, the 2,000-tonne TBM ‘Caroline’ has begun the five-mile (8-kilometre) journey towards Greenford from West Ruislip in West London. Caroline is named after the pioneering first professional female astronomer, Caroline Herschel.

The HS2 company now has five TBMs constructing tunnels for the HS2 railway. Caroline, the giant machine launched last week, will now dig for 22 months, non-stop except for Christmas Day, towards Greenford, boring five miles of the twin-bore Northolt Tunnel. Caroline will be operated by a crew of 15 people, working in shifts. An additional 25 people will directly support each tunnel drive on the surface.

Travelling at an average of 14 metres per day, Caroline will dig the five-mile tunnel and install 4,207 tunnel segment rings to create the tunnel. Each ring of the tunnel is made up of seven concrete segments which have been manufactured in the UK by Pacadar based in Kent. Rail freight operations play a critical support role, delivering prefabricated sections to the tunnel bore, and removing excavated spoil from the site.

The cost of HS2 has never been far from the headlines, but so too has the project’s employment opportunities. At the same time as Caroline was diving underground, the HS2 company announced that the workforce on the project had passed 30,000, making it one of the biggest employers in the UK.

“Creating jobs and contracts for businesses today, HS2 is an investment in Britain’s economic growth now and for generations to come”, said Mike Lyons, HS2’s Civils Delivery Director at a ceremony to start the TBM. “HS2’s construction continues to gather pace, and the launch of the Tunnel Boring Machine on HS2 is another significant moment for Britain’s number one levelling-up project”, he said, referring to the UK government’s policy of spreading economic growth beyond the booming South East and London area.