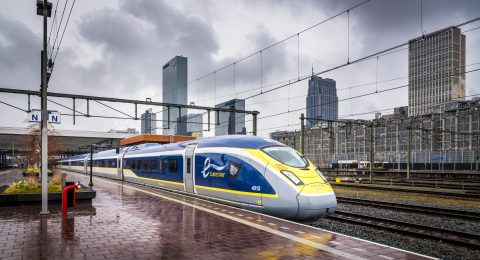 Dutch government to open international connections up to competition

The Dutch ministry of Infrastructure and Water Management will allow competition on the international lines to Brussels, Paris, London and Basel, as well as the service between Amsterdam and Berlin. The move is not without criticism, most prominently from Dutch Railways (NS) itself.

In a letter to parliament, Dutch state secretary for Infrastructure and Water Management Vivianne Heijnen says she wants to raise the bar for service offerings on international lines, and open the field for new initiatives from operators. She says that in doing so, the government is following the example of other European countries.

Since 2010, international rail was made open-access by the European Commission, but the Dutch government has been giving direct awards to NS, which runs international connections in cooperation with other railways. Now, the aim is for full open access on the profitable international routes to Brussels, Paris, London and Basel, while the connection between Amsterdam and Berlin will be opened on moments other than the afternoon rush hour.  The Dutch government is also mulling to grant open access to the night train service between Amsterdam and Vienna, which is now operated by ÖBB in cooperation with NS for which the Dutch operator received subsidy.

In an earlier interview to Dutch financial newspaper FD, NS chief executive Bert Groenewegen said he wasn’t necessarily in favour of opening the door to major players from France and Germany, as potentially losing exclusivity on international routes would mean a significant loss of income.

Dutch union FNV, too, has blasted the plans, saying it would be “naive” to expect international operators to take the national interest and that of the Dutch travellers at heart. It expects international newcomers to mostly target profits.

This article was first published by SpoorPro, our Dutch sister publication.