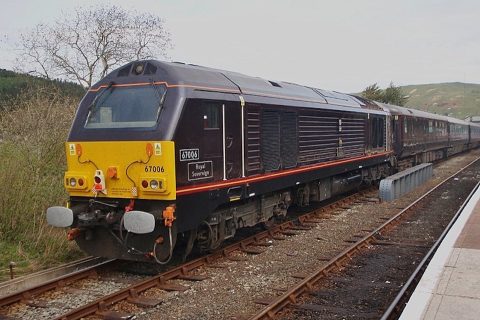 UK Royal Train stands down for funeral and accession ceremonies

Published on 13-09-2022 at 06:00
Locomotive 67006 Royal Sovereign heads the Royal train into Cardiff, bringing the Queen and Prince Philip to Wales as part of their Jubilee tour.geograph.org.uk

The coffin of Queen Elizabeth will not now be conveyed by the Royal Train from Edinburgh to London. Instead, on Tuesday, after lying at rest in the Scottish capital, the late monarch will be flown to London for a further period of lying in state. Her State Funeral will take place on Monday, 19 September. Before that, the new king, Charles III, will tour the four capital cities of the United Kingdom. However, he too will most likely fly to Edinburgh and Belfast, and be driven to Cardiff.

The huge national operation to manage the funeral arrangements for his mother, Queen Elizabeth II, has sidelined the train for any of the ceremonial purposes. The future of the Royal Train has been periodically questioned in the UK. Of the new king’s immediate ceremonial duties, which include visiting the capitals of Scotland, Northern Ireland and Wales, only the visit to Cardiff presents an opportunity for Charles, who was Prince of Wales until Tuesday, to arrive by rail.

Traditionally, the duties of hauling the Royal Train have fallen to a number of railway operators, which included the nationalised British Railways, between 1948 and the mid 1990s. However, since the privatisation of the railway industry, two class 67 diesel locomotives owned by rail freight operator DB Cargo UK have been designated and liveried as the locomotives of the Royal Train.

Historic steam locomotives, maintained by a number of heritage organisations, have frequently been employed to haul the Royal Train. Notably 60009 Union of South Africa, which hauled the train from Edinburgh to Tweedbank for the opening of the Borders Railway in September 2015.

Cities miss out on respectful opportunity

Charles pays his first visit to Edinburgh as the king on Monday (12 September). It may be argued that the volume of work facing the 73-year-old monarch may make a rail journey more useful. However, he will fly from RAF Northolt, the military air base in north west London.

The announcement that the Queen’s coffin would be flown from Edinburgh on Tuesday (13 September) came as a disappointment to subjects along the potential rail route. Cities, including Newcastle, York, Leeds, Sheffield, Derby and Leicester could all have been visited – albeit in a brief roll-by. However, noting the tens of thousands who lined the road route on Sunday through the comparable city of Dundee, safety concerns must have been a significant concern.

As The Prince of Wales, the principal official title held until his accession on Tuesday, King Charles made use of the Royal Train on several visits to the Principality. His son, William, who now holds that title and office, has also used the train for official duties.The Royal Family do not use the train for personal journeys.

As yet there have been no announcements made as to the future of the Royal Train. There have been periodic calls for the train to be retired, and for public services to be used instead. However, the new king is a life-long environmental campaigner and, while the position of the monarch means he will have to step back from many frontline involvements, his activism may well manifest itself in other, tangible ways. Whether on his own train or not, it may be safe to assume that the rails will have a regal presence during this new Carolean era.