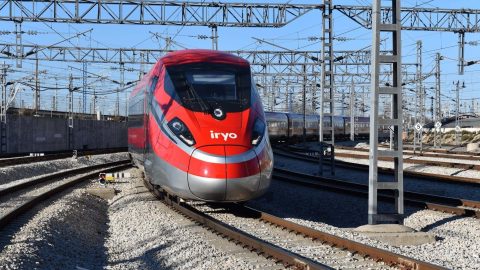 Private high-speed train operator Iryo will join Renfe and Ouigo on the Spanish high-speed rail network from November 25 onwards, Spanish media reported last week. Earlier this month, Iryo CEO Simone Gorini also said there would be some months to go before the start of operations.

Iryo, the brand of company Ilsa which is owned by regional Spanish airline Air Nostrum and Trenitalia, recently received approval from Spain’s competition authority CNMC for its planned services. Iryo is targeting up to 80 daily connections, the majority of which between Madrid and Barcelona. The operator will also serve Zaragoza, Valencia, Alicante, Sevilla, Córdoba and Malaga.

According to Gorini, Iryo is aiming for early morning arrival times in a bid to attract business travellers, as it does not want to compete with Renfe, Renfe’s Avlo label and SNCF subsidiary Ouigo on price. The new CEO, who joins Iryo from Trenitalia, also said a marketshare of 30 percent is feasible.

The start of operations was initially planned for earlier in the year, but a disagreement with infrastructure manager Adif over Iryo’s capacity requests on the section to Alicante caused a delay.

Like Trenitalia, Iryo will be using the Frecciarossa 1000 high-speed trains. They will be classified as Series 109 in Spain. Drivers started their training earlier in the year and the first group of 30 drivers completed their programme last month.