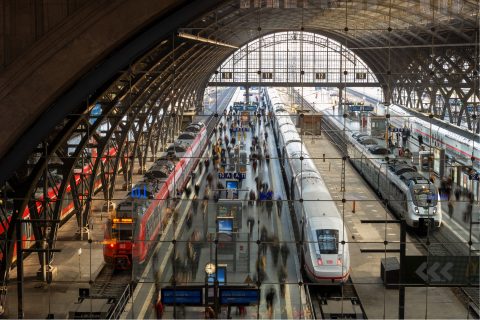 Germany’s much-lauded 9-euro ticket, which enables people to make unlimited use of regional public transport, has mostly resulted in additional journeys. Introduced due to rising costs of energy and living, preliminary findings show that it has not resulted in people leaving their car at home, as was hoped as an additional benefit.

Since the introduction of the 9 euro ticket in June, attention has been mostly focussed on ticket sales and passenger numbers. And by those metrics, the ticket certainly got off to a flying start. And while data did show a major increase in the number travellers on regional railway lines, preliminary research also shows that people have not shifted to rail from the road. It means that the 9 euro ticket might not have the desired climate impact.

A full evaluation of all the relevant data has yet to be concluded but the preliminary findings are in line with previous studies on the modal shift, rail expert Christian Böttger at the Berlin University of Applied Sciences (HTW) was quoted as saying by German press agency DPA. “Based on previous studies, only a slight shift from the road to public transport of at best two to three percent can be seen.”

A recent survey by German transport association VDV in the area around Munich seems to confirm that picture, as only three percent participants said they had left their car favour of public transport. While there was no major shift to rail, metro, tram or bus in Munich, there was, however, a “dampening effect” on traffic in the city. In June, traffic fell by around 3 percent, according to traffic data specialist TomTom. Indeed, this was the case in several major German cities after the introduction of the 9 euro ticket, DPA reports.

Several researchers have indicated that the public transport network’s capacity is key its success, but therein lies the problem. Immediately after the introduction of the 9 euro ticket in June, reports came out of overcrowded trains and platforms, partly due to the number of people taking their bicycles. Deutsche Bahn quickly had to rescind that offer.

This article was first published by Dutch sister publication OVPro.

Quality matters!
(Any one planning a trip, knows, if quality matters, then price is irrelevant, etc.)
For majority among ware owners (now with “On Demand” as the strategy) the road trucks is single available alternative, etc., etc.
Even worse, for IM:s low price, has turned high costs, as now infrastructure, is calling for frequent repairing and accordingly at clients added risks.
For high capacity – for utilisation of vast existing railway infrastructure, for high quality – a shift is needed!

The 9-EURO ticket is great for holiday and for people, who else pays a fortune commuting.

There is no quick fix. You have to match the car on ease of use and frequency of departures.

I believe many trips with the flat rate ticket were made on weekends. I am not sure if there is a lot of car traffic counting on weekends.