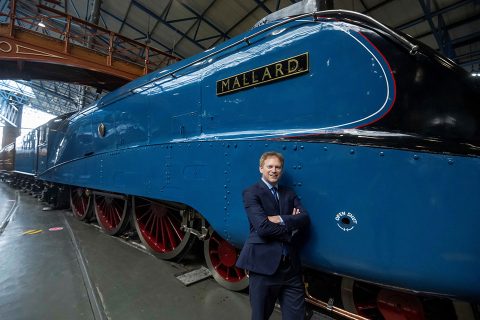 UK strikes settle into a war of words

Published on 08-07-2022 at 09:54
Back to the Future. UK government transport secretary Grant Shapps has expressed forward thinking for the British railway sector, and poses here with a 1936 record breaking steam engine. Image: UK Department for Transport

UK transport secretary Grant Shapps may have been hosting a press conference to announce generous spending on a digitalisation project, but the unions have encouraged him to get his finger out and solve the ongoing dispute before taking any more photocalls.

Mick Lynch, the leader of the Rail, Maritime and Transport union (RMT), has responded angrily to a series of social media posts over the weekend, made by secretary Shapps. There seems little prospect of peace between the unions and government, and perhaps even less hope of an early resolution to dispute which saw the British network grind to a halt two week’s ago.

Lynch took exceptional displeasure at a tweet from Shapps, which claimed that outdated working practices on the railway, dictated by the unions, are not just archaic, they are hugely damaging. The union leader accused the government minister of talking nonsense. “Grant Shapps is talking nonsense and is completely ignorant of how the railways work which is a major shortcoming for a Transport Secretary”, said Lynch.

For the government’s part, they have remained largely silent on the matter. The official feeds of the department for transport have concentrated on the East Coast digitisation announcement and on dealing with deteriorating passenger and baggage processing conditions at Britain’s airports.

Talks have however continued in an effort to resolve the dispute, which saw the RMT call out its members on three staggered days at the end of June, effectively crippling the British network for a week. Although no further strikes have been scheduled, the unions and railway management seem as far apart as ever in negotiations. Neither side is in the mood to back down, and the unions are confident they still have the support that their hugely successful ballot afforded them.

“The claims made by the rail industry that support for our strike is waning are a fallacy”, said Mick Lynch, the general secretary of the RMT. “The people who turned up for work were managers and contractors who were not balloted, in a vain attempt to break the strike. Despite attempts to undermine our action, the rail network barely ran any services and many of those were delayed on a tiny timetable.”

No hurry for additional action

The Rail Freight Group, which represents operators, suppliers and customers in the UK, has already called the strike action about as bad as it gets for rail freight. The dispute, which does not involve any rail freight operators, severely disrupted services, at a time when customer confidence was rising and interest in modal shift to rail was gaining momentum. “It is really damaging to customer confidence in rail, and to future growth”, said an RFG statement. “We urge all parties to find a rapid solution to this damaging dispute.”

The RMT has made its point. “Without the work of RMT members, the railway network cannot run in this country”, says their latest statement. Mick Lynch has been quoted as saying the union is in no hurry to call for additional action, but he has also said the union is prepared for a long haul. “We will take further effective strike action if a negotiated settlement on pay, and job security cannot be reached”, he warned.

Other disputes are available. Train drivers union ASLEF remains at loggerheads with ScotRail. The TSSA union is balloting members at passenger operators in England across Network Rail, and there are unresolved disputes on the London Underground.