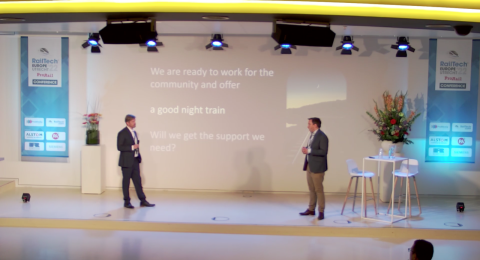 Financing rolling stock biggest problem for European Sleeper: ‘Will we get the support we need?’

Difficulties in acquiring the necessary rolling stock is the main reason for the delay of the European Sleeper’s first night train service from Brussels to Prague, founder and CEO Elmer van Buuren said at RailTech Europe. The new company is eager to start operations, but faces a wide range of obstacles.

Starting a new railway company is notoriously difficult. “We have been working on the European Sleeper project for 1,5 years. It has been really interesting, but really challenging. Only by actually starting the process you discover what can go wrong”, Van Buuren told the audience.

The underlying issue is that there has been insufficient investment in sleeper train rolling stock in the last decades, causing a shortage. “We are also trying to get hold of second-hand rolling stock, but there is limited availability.”

European Sleeper is set up as a cooperative. On June 28, it will kick off a new round of so-called sharefunding. Investments start at 300 euros and the company is aiming at 2 million euros in total. Contrary to popular belief, that money will not go towards buying trains, Van Buuren: “That amount won’t even buy you a whole carriage”.

Instead, it will be used for the process of acquiring the financing needed procuring rolling stock, such as getting the right people to work on the acquisition, Van Buuren explained.

More obstacles in the short term

As a new operator without rolling stock, European Sleeper works with partners. While sourcing the required train cars is difficult, it has proven particularly challenging for the sleeper service to Prague, which it offers in partnership with RegioJet. European Sleeper’s long-term plan is to buy or lease its own rolling stock.

However, to secure a loan at a bank or private equity supplier in order to acquire rolling stock from a leasing company, a certain guarantee needs to be offered. “We can make the plan, but we can’t offer the guarantee. At least not by ourselves”, said Van Buuren. European Sleeper is convinced they can be profitable, but also needs to be able to produce their product – a sleeper train service – for a longer period of time.

European Sleeper also faces difficulties when it comes to the allocation of infrastructure capacity. ”If you have infrastructure capacity for one year and you go to an investor, they ask: what you will do after that? Of course we will apply for the capacity again, but there are no guarantees we will receive an allocation. As a result, they are not going to finance a train for us”, Van Buuren noted, adding that capacity on its proposed route is also limited due to extensive planned track work in Germany.

The issue of insufficient infrastructure capacity needs to be solved first, says Van Buuren. However, he acknowledges that that will mean more track works, which in turn makes it more difficult to run trains on the short term.

No coordination and little support from infrastructure managers

The final issue the European Sleeper founder addressed is the fact that there are regulations in place that are not fit for open-access, even though this is now the default for international trains in Europe. “For instance, the priority for different types of trains is different in each country. In some a night train is high priority, in others it is not. How can you match that? We’re talking about the same timetable for the same train.” In the Netherlands, the regulations for capacity priority will hopefully be updated in 2026. “But we don’t have time for that, we will be gone in 2026 if the situation doesn’t improve”, Van Buuren warned.

“We need to be able to make a business case work, we cannot just hold up our hand at the government to get compensated for operating trains. We don’t want to do that”, says van Buuren. The way forward has to be improving the conditions for market entry, he stressed.

“There need to be financial backstops from lending institutions, be they banks, a country or several states. Those advocating for green transport need to put their money where their mouth is. We are ready to get to work, but will we get the support we need?