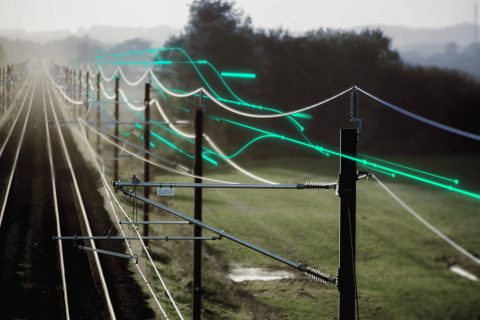 The UK’s Department for Transport has awarded Siemens Mobility funding for the further development of solar technologies for trains on non-electrified lines. Using a second funding stream, Siemens will also explore charging options for on-train batteries in non-electrified areas.

Siemens Mobility has partnered up the University of York and British Solar Renewables for the development of solar solutions for railways. The recent funding will allow the tie-up “to complete the final stages of technical development to feed solar energy directly to trains.”

To that end, a feasibility study will be carried out “to solve the engineering incompatibilities that have prevented renewable power feeding 25kV trains worldwide.” The companies aim to demonstrate the use of solar power on trains on the UK’s East Coast Mainline later in 2023 using a prototype convertor. Other parties involved in the project are Network Rail, DB Schenker and East Coast Mainline operators.

The second stream of funding will be channeled towards a charging solution for on-train batteries in non-electrified areas with the aim of creating so-called “green routes” in the network. The project is also intended to help accelerate the phasing out of diesel trains. Siemens Mobility he University of York, Network Rail, West Coast Mainline operators and Angel Trains will work to install a 25kV battery train charging Station that enables “charging fed from existing standard local power supply cables.”

While solar panels are already in use on buildings such as train stations and maintenance halls, other applications have been slow in gaining traction compared to other sectors. In the automotive field, car manufacturers such as Toyota, Nissan and Audi been installing solar panels for years. In 2022, Dutch manufacturer Lightyear entered a solar-electric vehicle into production.

In the railway sector, installing solar panels on sleepers would presumably make sense. In 2018, the company Greenrail was awarded European funding for sustainable railway sleepers. At the time, the firm said it was planning a research and development programme for solar sleepers. Bankset Energy already offers solar panels connected to the railway traction system for sleepers, and currently has several test sites in operation in Germany.

The developments in hydrogen and battery trains and the associated infrastructure such as recharging and refuelling are the central theme of the Rail Infra Forum on 15-16 March 2023 in Rotterdam, the Netherlands. The programme and speakers can be found on the event website.

Solar surfaces could make sense if they prevent unwanted vegetation growth along the rail tracks. Sleeper surfaces would be too small for meaningful solar power production, but modules could be fixed to.

There could be some connection between solar modules, so that they can be lifted easily upon works at the track, and be put back easily. On the other hand, they would have to withstand aerodynamic forces from the trains. The modules would in any case show whether rail traffic is clean.