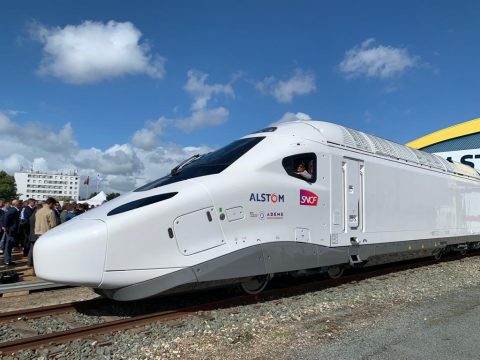 The first train of the fifth generation TGV rolling stock has arrived at the Velim testing facility at Cerhenice in the Czech Republic. There, manufacturer Alstom, SNCF Voyageurs and SNCF Matériel will conduct a series of tests in the coming months, including runs at 200 kilometres per hour.

The Velim railway rolling stock testing facility is a purpose-built proving ground isolated from the regular network. It features to railway track ovals for continuous running at various speeds. They also provide the various electrification systems common in Europe.

Before a train can be approved for operations, the rollings stock must undergo a series of test, including but not limited to: testing the 1500V as well as the 15 and 25 kV AC railway electrification, electromagnetic compatibility tests, brake tests and vibration and noise tests.

The PS1 test train will be performing tests until the summer of 2023, says SNCF. The new trains are expected to enter service from 2024 onwards. Alstom will be building 115 units initially, 100 for the French market, another 15 for international routes. Though tested in Czech Republic, the trains known as Avelia Horizon, will be manufactured in France.

The TGV M offers 740 seats, an increase of 20 per cent over previous models. Alstom also says that 97 per cent of components are recyclable and that the trains have been specifically designed for increased on-board accessibility. In true TGV fashion, the M series has a top speed of 350 kilometres per hour.

Hm…, which generation of track is the tested?
(Standard otherwise, currently, at TEN-T, at reinvestments, etc. – is of the generation, that was optimal, when steam was shifted out…)
For sake of utilisation, for sake of low cost, no longer current infrastructure standard, a low price standard, is optimal!