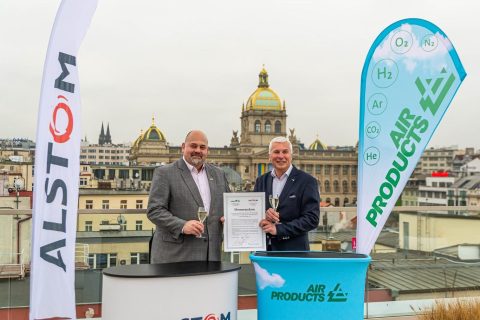 Published on 07-12-2022 at 15:05
Memorandum of Understanding signed by Alstom and Air Products in Czech Republic Alstom

Rolling stock manufacturer Alstom and hydrogen producer Air Products have signed a Memorium of Understanding (MoU) to deploy hydrogen solutions forrail for the Czech Republic, including the necessary infrastructure.

Anticipating the deployment of hydrogen trains in the Czech Republic, Alstom has partnered with the hydrogen supplier for the development of the necessary fuel infrastructure. Currently, a study is ongoing in the Czech Republic to analyse the local Czech railways and locate areas where hydrogen train technology would be a preferred technical, economic and environmental solution compared with other sustainable alternatives to diesel operations. The study is scheduled to end in the spring of 2024 and is based on a bilateral cooperation between a Czech consortium and the Norwegian research institute SINTEF.

It might therefore be a few years before any tenders for hydrogen trains are put out, as it is not yet clear where and how much hydrogen trains would be deemed the best option to reduce emissions. Rolling stock manufacturer Alstom already presented its hydrogen train, the Coradia iLint, in the Czech Republic and Slovakia during its ‘Railshow’ earlier in May 2022. For this, Air Products also played in role by refilling the train with hydrogen from a mobile refuelling station, and now a longer partnership has developed.

“With Air Products, we can supply the necessary fuelling stations and build the hydrogen infrastructure in the country.”, says Dan Kurucz, Managing Director of Alstom in the Czech Republic and Slovakia. “We are in contact with the regions in this matter and we are trying to take action to support the creation of the necessary legislation, which is still missing in the Czech Republic”.

“We will use our expertise as the world’s largest hydrogen producer and are ready to invest in building hydrogen infrastructure to kick-start the use of low-carbon hydrogen in practice”, commented Vlastimil Pavlíček, Business Development Director New Technologies, CE&CIS subregion Air Products. “Together with Alstom, we believe we can build a working network of hydrogen trains that will demonstrate that hydrogen is the ideal propulsion for non-electrified lines. And that the operation of hydrogen trains is absolutely environmentally friendly and safe and, in the medium term, economically viable”.

The developments in sustainable rolling stock and the associated infrastructure such as recharging and refuelling are the central theme of the Rail Infra Forum on March 16 2023. From alternative fuels and batteries in passenger rail to on-track machines, and from recharging batteries under catenary to hydrogen refuelling. The programme and speakers can be found on the event website.