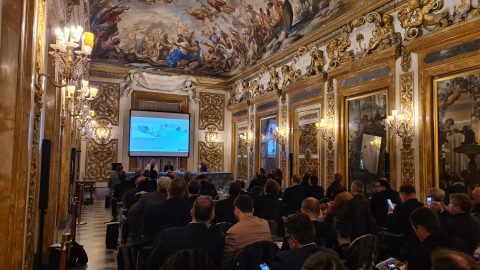 Published on 01-11-2022 at 11:30
Škoda Group organised the event 'Tram Revolution' in Florence at the opening of the new branch Škoda Group

Škoda Transportation Group opened an office of its new subsidiary in Florence, Italy, on Friday 28 October in a bid to strengthen its position on the international market. The company sees similarities between the Czech and Italian operators, and aims to bring self-driving trams to Italian cities.

In Italy, Škoda Group will focus its attention on train transport and rolling stock for urban transport. Olesea Lachi, who has long been responsible for sales of rolling stock in the Group, has become the managing director of the subsidiary. She sees many similarities between the Czech operators and its Italian counterparts. “The specifics, preferences and habits of Italian operators are like the Czech ones. Many cities in both countries are UNESCO heritage sites and offer stunning historic centres characterised by narrow streets, arches with small, curved radius, which place higher demands on vehicle manufacturers.”

The company plans to offer partners a comprehensive solution, from the manufacture of individual components to the delivery of complete vehicles and their subsequent maintenance. With a similar move, Škoda Group has successfully entered the German and Finnish markets. As one of the fifty countries where Škoda has delivered its products, the manufacturer has already worked on several orders for Italian customers in the past. Its trolleybuses run in Bologna and Cagliari, where Škoda has also supplied trams. Passengers can take electric units for a ride in Domodossola.

At the festive opening of the subsidiary’s office, Škoda Group organised an event called “Tram Revolution”, which was attended by representatives of Italian institutions and industry experts. During a roundtable, opinions, studies, experiences, and specific programmes on the future of mobility were gathered among needs, urban limits, combined strategies, and future projects.

Also, discussions were held on how to sustainably improve the vitality of historic cities such as those in Tuscany, which characterise Italy in a distinctive way. “The experience of Florence speaks for itself: the tram is essential for the daily life of cities, changing and improving them”, said Mayor of Florence Dario Nardella.

“The tram route appears to be a throwback to the past, but instead is a modern and efficient infrastructure and a symbolic example of virtual mobility”, according to Škoda.

In the city of the future, Škoda Group envisions a self-driving tram which runs completely safe thanks to the latest technology. Soon, battery-powered vehicles that are not only environmentally friendly and sustainable, but also able to move more quickly in historic centres with narrow streets, will be more common in cities, says Škoda. Florence has recently been shortlisted for the nine Italian capitals that are to be ‘zero-emission’ or climate neutral by 2030, meaning vehicles without emissions are a must.

The Czech manufacturer is known for its low-floor trams, electric locomotives, suburban train units, metro sets, electric buses and trolleybuses. It also produces control and drive systems for transport systems. Orders for electrical systems and components ‘characterise this year’, according to the company. For example, Wabtec (formerly GE) is building a fleet of locomotives for Kazakhstan with components from Škoda, and the company produces complete drives including motors for locomotives for track maintenance of the Italian company Tesmec. Traction engine components will be used in locomotives or S-Bahn vehicles in Hamburg, Germany, which are produced by Alstom.

Formerly part of parent company parent Škoda Works, which also included the car manufacturing branch, the rolling stock branch Škoda Transportation is now separate, and owned by investment group PPF. It has several production sites in the Czech Republic, as well as one in Finland, and employs over six and half thousand people in its companies. The Group has a total of 15 subsidiaries or joint ventures in the Czech Republic as well as in Finland, Hungary and Germany. The company takes pride in their research and development efforts, saying it is “only thanks to high investments in R&D that Škoda Group can regularly come to market with new and modern products that successfully find their place on foreign markets”. It invested 81.1 million euros in research and development in 2021.