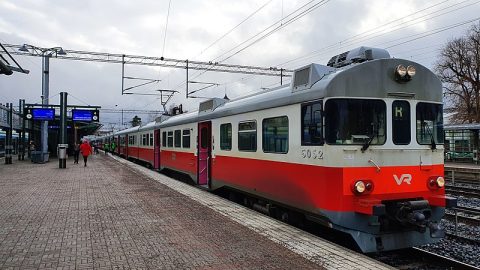 Finland’s first open-access rail operator prepares operations, what did their journey look like?

Newly founded operator Suomen Lähijunat Oy (Finland Commuter trains) has big plans in Finland. “We chipped away at the existing monopoly in Finland on the bus side, and we could very well be at a turning point for rail now”, says founder Pekka Möttö in an interview with RailTech.

Entrepreneur Möttö started in 2012 with Finland’s private bus operator Onnibus and thus has some experience in setting up a new transport company. In addition to Onnibus, which became successful in breaking open the bus market, a rail-counterpart called Onnirail was founded. But starting up as rail operator turned out to be a difficult journey, and Onnirail never became a success. But now, its successor might change things in Finland.

New life to a shelved idea

In recent years, there has been a lot of discussion on what to do with the old trains that Finnish state-owned operator VR Group does not need anymore. Before, these trains were scrapped. However, a year ago there was a change in policy at VR. Recently, 11 eleven old trains were put to auction to whoever was interested.

“We had actually given up the idea to start a private operation. We don’t have a fleet leasing company in Finland like many countries have, so I thought it was just not going to happen. But when this change of policy came, it opened up the opportunity for anybody to get access to rolling stock, so we set up the company Suomen Lähijunat Oy”, says Möttö.

This change gave new life to the idea of setting up a private operator, but also the railway market changed in the meantime. “We have an open-access railway model now, which is market-based. Our aim is to bring back regional trains, because many regional train operators ceased over the last decades, only one operator, VR, remained.”

Making the scraps into trains again

When the 11 old trains became made available for sale, Möttö and his newly founded company Suomen Lähijunat Oy were first in line, and signed a deal to acquire the trains when the necessary financing was brought in. However, the word ‘train’ is perhaps too much praise at this moment, as Möttö describes the fleet in its current condition as “more of a graveyard of trains”.

However, the metal materials can be reshaped to form operational trains again, and even though there is much work to be done, this is actually the “fastest and cheapest way” to get started for the operator, says Möttö. Also, this means the old trains can be recycled which is the most environmentally and efficient way, and makes the most out of the material.

“We are going to use what we can use, and make trains with a low entry, which is accessible for everyone”, says Möttö, which was not the case before.

Lots of interest from the regions

The plan is to start in Turku, the third biggest urban area in Finland. The first planned connection between Turku and Uusikaupunki will be a 58-minute timetable, which means it needs three units to launch it, says Möttö. Before the newly refurbished trains from the old parts can enter the tracks, they need to get the necessary approval.

There is a freight train two times a day. There is easily enough space for 100 extra trains, and the track was recently electrified. But some basic work needs to be done before trains can operate at 100 kilometres per hour. Möttö is however a bit sceptical: “there are some signs that there might be a delay to finalise the works, and this could be with the goal to block a new operator.”

Because of the Russian gauge in Finland, the width of the tracks is a problem for acquiring trains from other countries. “If we would have the same gauge it would make our life easier as private train operator, with more access to rolling stock”, he says in response to the proposal of the European Commission that all EU countries should make a plan to migrate to standard European gauge. However, “as Finnish taxpayer I am not sure if it is really worth it”, says Möttö. “I have not seen the figures, but it will cost a ridiculous amount of money to convert all the tracks.”

The new operator is currently negotiating with investors to finance the deal with VR and to get started with work on the rolling stock. According to Möttö, infra investors are quite interested in the plans of Suomen Lähijunat Oy. At the time of this interview, there is no date yet for the handover of the train parts from VR to the new operator.

In Finland, there are some private operators on the freight side of rail, but for passenger trains, Möttö is not aware of any other initiatives for open-access operators.

The bus company Onnibus he founded with a friend has been the highest-profile public transport company in Finland. Möttö left the company in 2016, and coincidentally, his founding partner of the bus operator left Onnibus last month to run freight operator Finniarail, meaning both entrepreneurs have entered the railway business. “Although we definitely didn’t plan this together, it was a fun coincidence”, says Möttö.

There is a track available and the infrastructure manager is a separate entity from the state-owned VR, but when it comes to trains “it always involves politics”, says Möttö. “When we started Onnibus, which totally changed the Finnish business model for buses, we did not need politics, only customers, but this is a different world.”