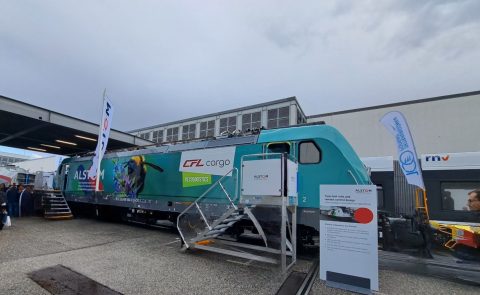 A Traxx locomotive with battery traction for the catenary-free last mile will be operational in three years, said Frank Schleier, vice president locomotives at Alstom, to RailTech during Innotrans.

The Traxx locomotive displayed at Innotrans 2022 in Berlin is for CFL Cargo, and will operate in Luxembourg, France and Germany. The locomotive for freight operations has a maximum speed of 140 kilometres per hour. It has space reserved for traction batteries, but this version is still in development.

The diesel option of the train is already operational, and Alstom is developing a version with battery traction for the last mile, which usually happen with diesel because the last mile in for example ports are often not electrified. “The prototype is now in the lab, and in the next three years we will complete the battery option”, said Schleier. Some work and testing to guarantee that the operation is stable needs to happen. The locomotive also features a integrated remote control for shunting, which can be operated by a single person. This allows for new logistics concepts to avoid shunting operations.

The Traxx locomotive is the design of Bombardier, which is now incorporated into Alstom. There have been little changes to the locomotive with the takeover, the main difference being that it is updated with the latest Alstom digital signalling. To be ready for cross-border operation, it is equipped with European Train Control system ETCS, as well as the necessary class B systems, and can run under 4 different catenaries, required for operation by CFL Cargo.

With the ETCS on board, it is also ready for future ATO installation. “However it might take around 10 years before ATO operation will happen with locomotives”, says Schleier. This is mainly because the implementation of trackside ETCS in the infrastructure needs to be in place, he says.

For proving timely and high quality, thus a low risk device, thus safely providing for safe “eta”, electrification of railways (now. regrettably inferior) has to shift and to include hybrid technique.
(Compare success story the automobile… was and still, is based upon own energy converters, on board the “autos”…)