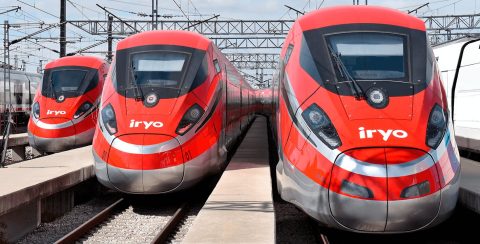 The ticket for the first journeys with Iryo are on sale from Sunday. Starting 25 November, Iryo will be the third operator on the Spanish high-speed network with its initial service between Madrid, Zaragoza and Barcelona.

Different than other newcomer Ouigo, Iryo does not position itself as a low-cost operator. It focusses on high-quality, wanting to “set a new standard of what it means to travel at high speed in Spain”. Iryo will have a dynamic price system, which Iryo says that will allow them to offer the best value for money throughout the day.” Prices start from 18 euros per journey and travellers will be able to choose between four classes on board. The gastronomic offer will be key, for which Iryo the operator launched Haizea (meaning wind in Basque), its own brand of bars and restaurants on board.

Train drivers prepared for the launch

The first generation of 30 train drivers finished their training last July, which began on January 17, 2022. The training program consisted of the qualification of the ETR 1000, which in Spain has been assigned the Series 109, the training of the ETCS (European railway control system) and LZB cabin signaling, as well as the training of the ASFA Digital system in its version 4. In addition, the train drivers have received training on the Madrid-Barcelona and Madrid-Valencia High-Speed ​​lines and railway infrastructure manager ADIF gave a presentation on risks and emergencies in tunnels.

The course has been given by the CAPTRAIN training center, the company responsible for the homologation tests of Iryo vehicles, by Renfe’s ETPCO for Ratings by Infrastructure class of the previous lines and by the training school of Trenitalia with the trainers and machinists expert in driving the ETR1000 in Italy.

On December 16, 1Iryo will launch 16 daily trains on the corridor Madrid-Cuenca-Valencia. Next year, in June the connection Alicante-Madrid will launch, with stops in Cuenca and Albacete, where four daily trains will be offered. In the future, Iryo wants to extend its services also outside Spain, naming Portugal, France and other countries.