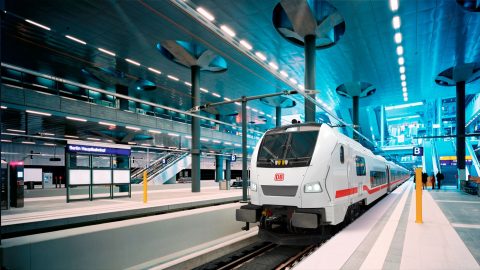 Deutsche Bahn (DB) on Wednesday took the wraps of the new ICE-L, Germany’s first long-distance high-speed train with a low floor for easy access. The train cars will be first used on the international service between Berlin and Amsterdam.

The new ICE-L, developed and built by Spanish manufacturer Talgo, will make its debut in the long-distance fleet in late 2024. The international service between Berlin and Amsterdam will be the first to benefit, followed by the touristic service to the Bavarian town of Oberstdorf and the German coastal hotspot of Sylt in 2026.

The ICE-L measures 256 metres in length and comprises 17 train cars, a control car and a multi-system locomotive, meaning it can handle more than one electrification system. The train can accommodate 562 seated passengers, 477 of which in the second class. The ICE-L can hit a top speed of 230 kilometres per hour.

The ICE-L will be fitted with the newly designed ICE-interior, meaning new seats, a better WiFi-signal, improved cell phone reception, more storage space for baggage and bicycles, as well as real-time passenger information.

The new trains sets will arrive later than expected, and for this reason NS International in the Netherlands was forced to rent new locomotives in order to achieve the desired reduction in travel time by year-end 2023.

A pity it is, that infrastructure remains at standard optimal, at time of shift from steam…
Mere media, contact between rail and wheel, shall not suffer from squats and cracks…
Accordingly broken rails shall not remain cause number one for derailment…
Simply the decisive shift, a contemporary infrastructure, a New Old Railway, urgently has to be constructed!