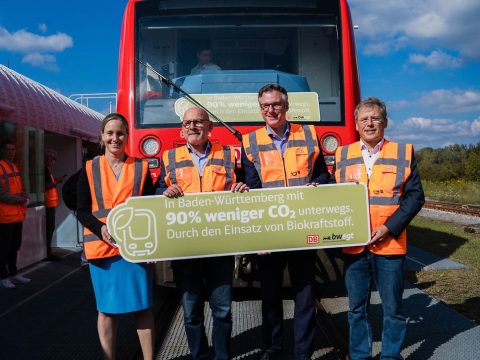 Deutsche Bahn (DB) has switched its first 57 regional trains to biofuel as part of a nationwide campaign to phase out regular diesel and reduce CO2 emissions.

The effort got underway in the federal state of Baden-Württemberg, where trainsets running on biofuel will be used on the Aulendorfer Kreuz and Donau-Ostalb networks. The filling station in Aulendorf has been converted for flow of biodiesel. By the end of next year, the station should have a capacity of 1.3 million litres. It will not be a dedicated DB-filling station; other operators can use it too.

Using regional trains on biodiesel will help reduce CO2 emissions on the mentioned routes by 90 percent, DB claims. “By December 2023, we will saved around 3,700 tons of CO2 on the two networks”, head of regional transport at DB Evelyn Palla says, adding that the company wants to switch regional trains in other regions to biofuels too before the end of the year.

The trains run on Hydrotreated Vegetable Oil (HVO). DB stresses that the biofuel it uses is free of palm oil.

The developments in sustainable rolling stock and the associated infrastructure such as recharging and refuelling are the central theme of the Rail Infra Forum on 12 and 13 October in Berlin. From alternative fuels and batteries in passenger rail to on-track machines, and from recharging batteries under catenary to hydrogen refuelling. The programme and speakers can be found on the event website.