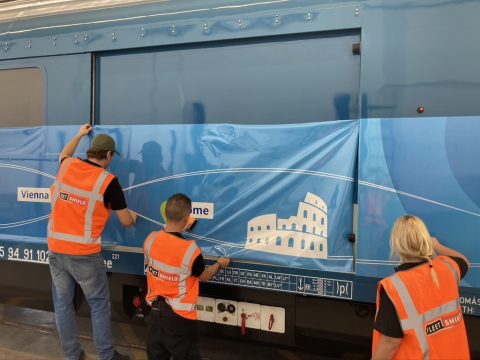 If a train approaches that it is pristine condition, it can mean a few things: it is brand new or it has been washed. However, it can also mean that a protective film has been applied. Dutch company Fleetshield is an expert in that field. RailTech.com sat down with managing director Jeroen van Son to talk about the business and the company strategy.

The protective film is near impossible to spot with the naked eye, nor does it carry a company logo. In other words, it is quite literally on the background, drawing attention to the excellent condition and appearance of the rolling stock instead. “We are in the business of protecting, enhancing and perserving the state of trains, carriages, trams, metros and buses, and we do so in a way that also benefits the look and feel of a vehicle”, Van Son explains.

Protecting, preserving and enhancing should perhaps be common practice, if only to protect rolling stock from the scourge of graffiti. Yet it took several years before the railway sector realised that Van Son wasn’t simply wrapping or doing stickers.

Fleetshield has been active for close to twenty years now, during which time Van Son encountered a lot of hesitation and at times hostility towards the practice of applying a film. It was often viewed as being expensive and redundant. As such, Van Son had to tap into the latent demand of operators. Local Dutch transportation companies GVB and HTM, operating in Amsterdam and The Hague respectively, were the first that took the plunge.

“Our goal had always been protecting against graffiti. But in our interaction with customers we realised that a certain ‘look’ was equally important, if not more so. So we ended up creating a Tour de France-themed Thalys and special trains for the Olympics for Dutch Railways (NS). We pursued a number of directions in those years and gained vast experience in the process, ranging from working on the bodywork of a train, on client processes, preservation and cleaning to the EN-45545 standard on fire protection on railway vehicles”, Van Son recalls, adding that Fleetshield now speaks the “customers’ language”.

With these notches on its belt, Fleetshield decided to shift its approach and businessmodel to project management. The company now markets itself as a process specialist that delivers turnkey solutions, and rolling stock manufacturers soon took notice.

Because of the project-based nature of Fleetshield’s work, there is not one single biggest customer. It changes from job to job. That said, Dutch Railways (NS) and Amsterdam’s GVB have been and still are important clients. Van Son estimates that around 20 to 25 percent of all NS rolling stock has been fitted with a protective film. Fleetshield is currently working on their double-decker trains, the so-called VIRM 2/3.

The company is also active in Spain at the moment, where it is working on the new CAF-produced M7 metro cars for the GVB. This project gave Fleetshield a foot in the door with a manufacturer.

“We approached CAF ourselves and had to bid for the job. We came out on top not because of price, but on added value. CAF saw the benefit of having another Dutch company on board that could act as an intermediary in their communication with GVB. We know exactly what they want and can quickly relay their wishes”, says Van Son.

The job has been a stepping stone for Fleetshield, which is now being involved by CAF in a number ways, one of them being an advisor and consultant. “We are now somewhat of a chameleon that can facilitate a variety of processes, and we’ve acted as problem solver for manufacturers in Germany, Czech Republic and Poland. We are now able to do these things faster and at a lower price than the competition.”

Ironing out issues and taking the weight of the shoulders of companies fits with the times, Van Son notices. Following the easing of corona restrictions, companies’ order portfolios are bulging. At the same time, engineering departments are short-staffed or have seen a change of the old guard to a younger generation.

“Getting all the work done is a challenge in itself, and in such an environment an aspect such as a protective film for a train can be somewhat of a nuisance for planners and engineers. To take care of project management all the way from the drawing board to application is a competitive advantage, even on a European level”.

The film itself is not just any product. While essentially off the shelf, the material does need to meet certain requirements for rail application, and configuring the film to meet these requirements takes skill and experience. This is especially true in meeting the EN-45545 standard on fire protection, Van Son says.

“The film needs to have a certain mechanical resilience and it needs to be able to withstand UV light and chemicals. It even needs to be able to cope with the specific detergents that individual operators use to clean train cars or to remove graffiti with. On top of that, the film should not crack, stretch or detach, and the separate batches need to be identical.”

The application is not limited to the outside, Van Son also adds, saying that special films on windows can help in heat proofing a train. This in turn means the airconditioning does not need to run full steam, which reduces energy consumption. “Having these films also adds to passenger comfort, so it is a worthwhile long-term investment for operators”.

Looking ahead, Van Son and his company Fleetshield have its sights set on a number of developments. First and foremost, Fleetshield will continue to target manufacturers of rolling stock as clients. Secondly, expansion to other markets is on the cards. The company is currently active in the Netherlands, Belgium, Luxemburg, Germany, Spain and the Czech Republic. However, Van Son is also eying the Scandinavian countries. Fleetshield is also pursuing a new major deal for consultancy and application engineering with a big company in the EMEA (Europe, the Middle East and North Africa) region. As this is an ongoing process, Van Son cannot go into detail about the project.

Finally, it seems there is a groundswell of interest in the field of locomotives, where operators are becoming more and more interested in giving their locs a certain look. “There is certainly a demand there, but we have yet to come to grips with that market”.