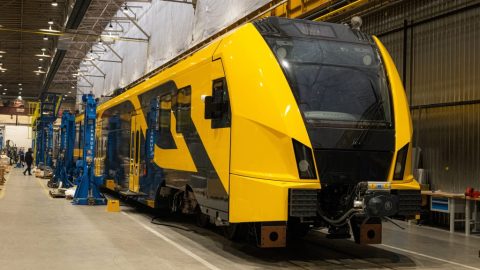 32 electric passenger trains of manufacturer Škoda will have to be delivered to Latvia disassembled via road instead of rail, as the route from the plant in Czechia via Ukraine and Belarus to the Baltic country is no longer possible for the time being.

Škoda Vagonka has committed to delivering 32 new electric passenger trains to Latvian Railways (Pasazieru Vilciens) by the end of 2023 under the terms of a deal signed in 2019. According to Latvian Transport Minister Talis Linkaits, the first new electric trains will be transported to Latvia disassembled via road towards the end of June or the beginning of July, as reported by the Baltic Times.

“Obviously, the war has affected the mode of delivery – it was planned that from the production plant in Czechia the trains would be delivered to Latvia via Slovakia, Ukraine and Belarus. Now this is no longer possible, so the manufacturer has chosen to transport each carriage separately by road”, said Linkaits.

Once the trains arrive in Latvia, the carriages will be assembled again, tested and certified. According to Linkaits, the new electric train might begin carrying passengers at the beginning of next year. “This is a large-size and very specific cargo, the transportation of which requires permits and making sure that all bridges and all overpasses can withstand the weight.” The minister said that work on the trains’ transportation route is nearly finished.

The electrical units for Latvian Railways are based on the RegioPanter trains, which are manufactured by Škoda and already in use on the Czech and Slovak markets. The new trains will run mainly on the lines from Riga to Aizkraukle, Tukumsu, Skulte and Jelgava.

Why via road?! According to my recent Rail Map of Europe there is rail connection from Czechia through Warsaw and Bialystok, Poland, into Lithuania and then to Latvia.

Two diffrent gauges.1435 mm on czech,poland and small bit in lithuania
And from there the remainder is on 1520mm .As well transport cost less on the road as it didnt need to be changed from one gauge to the other.
Finally the infrastructure is not to par to deliver such things weight limits, height limits ,etc. I assume that the map you have is either of Rail baltica which is construction stage or the map were is the railway in the suwalki gap between Suwalki and Kaunas