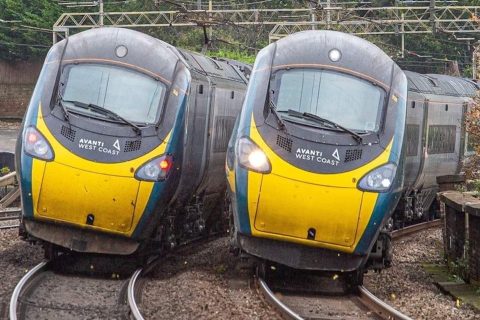 Does HS2 threaten the future of Britain’s tilting trains?

UK passenger operator Avanti West Coast is putting its Pendolino tilting train fleet refurbishment into full swing with the release of the first upgraded sets into revenue-earning service. With HS2 on the horizon, where does their future lie?

The arrow-straight HS2 line, currently under construction between London and Birmingham, may be the answer to the the twisting route of the West Coast Main Line (WCML), but does that supersede the twenty-year old fleet introduced when the franchise was in the hands of Virgin Trains. Supporters say the 125 miles per hour fleet with a design capability of 140mph (200 / 225 kph) has plenty of life left.

Announced last month as part of what Avanti is calling the UK’s biggest train upgrade, the tilting electric trains are being fitted with a host of new technologies, designed to help improve the travelling environment, passenger loading, and maintenance costs. There is clearly faith in the design. The trains did however draw initial criticism for a claustrophobic feel – a compromise between the high-speed tilt and the necessarily constrained profile of the British loading gauge.

However, much has been done since the introduction of the trains, and the reduced travel times and increased frequency of services has done much to win over customers. Passenger numbers on the WCML have grown beyond all expectations. Now Avanti say they are reconfiguring the 35 longer eleven-car sets within the fleet to provide 2000 extra standard class seats. That would appear to be about 60 extra per train – achieved by redesignating some carriages within the company’s three different travel classes. In all, 25,000 replacement seats will be fitted to the entire fleet.

The rolling refurbishment programme is being carried out by Alstom at their facility in Widnes, on Merseyside, near Liverpool. The site is convenient to the WCML, reducing stock movements and down time. The economic benefits for the north of England have not been lost on government sources. “The iconic Pendolino is back and better than ever before”, said the recently appointed rail minister Wendy Morton. “This refurbished version of the classic fleet is a fantastic example of our cutting-edge rail network and how our railways are leading the way in creating a cleaner, more environmentally friendly and modern transport system.”

Alstom does have other interests in the West Coast. In partnership with Hitachi, they are contracted to build a new fleet of trains to replace the ageing and unpopular “Voyager” diesels. Those trains serve secondary destinations, reached via the WCML, where electric traction is not available – such as North Wales. Pendolino trains – which do not have bi-mode capability – have been scheduled behind diesel locomotives on some such services.

The Pendolino design draws on experience in the 1970s, when British engineers pioneered the technology with the commercially ill-fated Advanced Passenger Train concept – originally a gas-turbine powered design which provided proof of concept on the route. So far the Pendolino train fleet has clocked up more than 270 million miles in service (430 million kilometres). The fleet is still only around halfway through its operational life expectancy, and will still be in service when the dedicated HS2 line is commissioned.

Alstom commissioned their depot in Widnes with this project in mind, helping to secure 100 skilled jobs. “We are delighted with the launch of the newly modernised Pendolino”, said Peter Broadley, managing director of services at Alstom. He emphasised the longevity of the trains too. “Our team at Widnes have created something amazing and we are incredibly proud of the final product. We hope it secures the future of the Pendolinos on the West Coast for many years to come”.

Avanti West Coast is a branded partnership between the UK transport operator FirstGroup and Italian state railway company Trenitalia. In common with almost all passenger operating franchises, the company was brought under direct government control in 2021, as part of the pandemic rescue package. It now operates as a management concession.

When Phase One of HS2 becomes operational, it is estimated that it could attract approximately half the passengers who would otherwise use WCML train services, says a HS2 information paper by the UK government. This will reduce crowding, and creates the opportunity to recast the WCML timetable. As part of the strategic case for HS2, the new capacity of the WCML is significant, and offers opportunities for more commuting, more regional journeys and more rail freight. The role of the Pendolino trains when HS2 is in service will remain to be seen.

HS2 won’t be operational until around 2030. At that point the Pendolino fleet will be pushing 30 years old so close to end of their design life I would have thought.