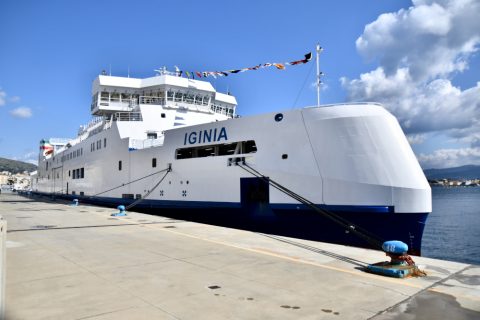 New ferry with batteries and solar panels for trains to Sicily

A new ferry service for trains to cross the Strait of Messina has been inaugurated on Monday by Italian infrastructure manager RFI. It is operational right away to carry trains from mainland Italy to Sicily. The ferry is hybrid-powered and will have zero emissions in the port.

The ship named ‘Iginia’ will transport trains, passengers and goods between Messina and Villa San Giovanni. There are direct trains from Rome or Naples to various destinations in Sicily. Some trains are transported on the ferry across the Strait of Messina, and then split into two parts, one heading west and the other east on the island.

The ferry trip across the water to Messina on Sicily only takes about 30 minutes. Passengers can stay seated in their train carriage in the ferry’s hold or head up to the deck. The new ship is 147 metres long and 19 metres wide and has a maximum capacity of 27 rail wagons on 4 tracks. It can accommodate 700 people, including the crew. Iginia will join RFI’s fleet of ships between Messina and Villa San Giovanni, together with its sister ship Messina, Villa and Scilla, and the five ships of the Bluferries subsidiary.

The ferry runs on two battery packs that are recharged by solar panels installed on the ship, and can also be recharged by ‘shore sockets’ if necessary. The hull of the new unit, equipped with engines, generators, propulsion machinery and systems, was built in Porto Nogaro by Cimar shipyard and then towed to Genoa.

There are also innovative bilge water and sewage treatment plants on board for more reduction in polluting emissions. These technologies allow zero CO2 and greenhouse gas emissions in the port and during entry and exit manoeuvres, according to RFI. The ship has obtained the “Green Plus” certification – the highest certificate in the field of sustainability – from the Italian Shipping Register.

The ship is built by by the Temporary Business Association composed of Italian shipyards T. Mariotti SpA and San Giorgio del Porto SpA. The economic investment is 57 million euros, 7 of which are financed by Italy’s National Recovery and Resilience Plan, a European fund for restoring the economy after the crisis related to the coronavirus pandemic. RFI is also preparing to launch a tender for the construction of another sustainable ship to carry trains.