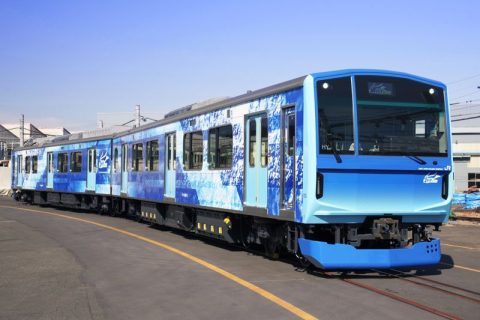 JR East will conduct test runs for the two-car train on the Nanbu Line, connecting Tachikawa Station, Tokyo and Kawasaki Station as well as some other unspecified lines from late March. The company aims to start commercial operation of the Hybari hydrogen train in 2030. Hybari stands for HYdrogen-HYBrid Advanced Rail vehicle for Innovation.

The development cost for the test train totaled some 4 billion yen, around 30 million euros. The Hybari train can travel up to about 140 kilometers per charge of hydrogen, according to the developers. Initially, the test train will have a speed of 100 kilometres per hour.

In the train, high-pressure hydrogen from a storage tank on the train is provided to the fuel cell system developed by Toyota Motor to generate electricity through a chemical reaction with oxygen in the air. This electricity is sent to the storage batteries by Hitachi to drive the motors. Hitachi’s railway hybrid drive system technologies developed with JR East are also implemented. The train is equipped with four units of five hydrogen tanks each with a total capacity of 1,020 litres at a pressure of 700 bars.

Toyota’s fuel cells are also used in the European FCH2RAIL project, which develops a prototype by fitting an electric train by the Spanish CAF with hybrid fuel cells and a battery system.