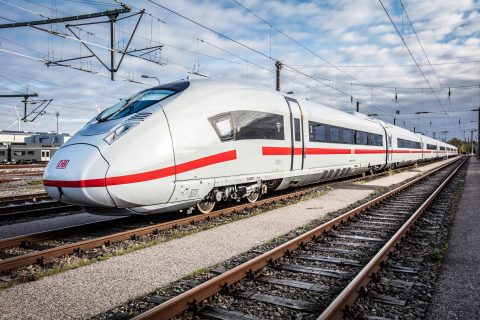 Siemens has bagged an order for 43 ICE 3neo trains to the tune of 1,5 billion euros. The Deutsche Bahn contract was announced earlier on Tuesday in Berlin and brings the total number of ICE 3neo trains ordered to 73. The first units are expected to be entered into service by the end of this year.

The new ICE 3neo trains seat 439 passengers and can reach a top speed of 320 kilometres per hour. The train sets feature up to eight bicycle spots, power sockets and tablet holders. Additional doors should make for faster boarding and disembarking while new a new lift system should allow for easier access for passengers in wheelchairs.

With the new order the total number of ICE trains in use is expected to hit 450 unit by the end of this decade. The 73 new ICE 3neo trains will increase long-distance passenger capacity by 32.000 seats. The first units will run between Cologne and the Rhine-Main a metropolitan area.

According to DB, the new ICE 3neo trains will enable it to run the timetable as envisioned under the so-called Deutschlandtakt. This national strategy calls for twice the number of passengers by 2030 and an increase in the share of rail freight in overall transport to 25 percent. The plan also calls for two ICE trains between major urban centres every 30 minutes from 2025 onwards.