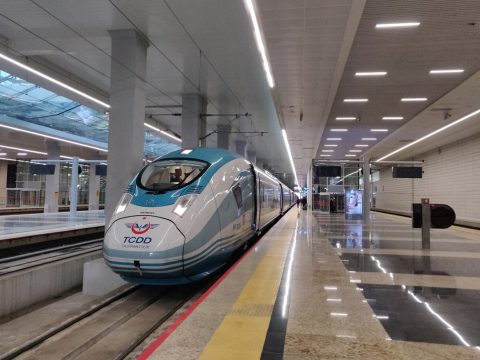 Turkish president Recep Tayyip Erdogan earlier this month inaugurated a new 102-kilometre section of the country’s high-speed railway network. The new section is an extension of the existing Ankara-Konya line that now reaches the city of Karaman.

Travel time between Konya, situated in the country’s interior, and Karaman is reduced from 1 hour and 20 minutes to round 50 minutes. Eventually, a travel time of less than 45 minutes should be feasible, Turkish railway company TCDD says. Travel time to Karaman from the capitol Ankara was reduced by 20 minutes to 2 hours and 49 minutes.

The new high-speed line will also be used for freight transport and is equipped with automatic train protection (ATP) and  ETCS Level 1. TCDD uses both CAF units and Siemens Velaro train sets.

There are currently six high-speed trains services in operation in Turkey, with a seventh – the line between Ankara and the city of Sivas – expected to be entered into service later this year. At least six more services are in various stages of development.