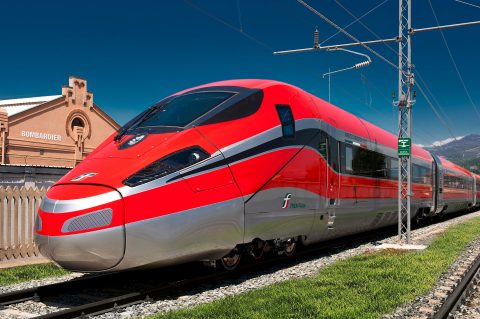 With the transaction, Alstom now finally discharged its divestment obligations as required by the Commission’s clearance decision. Last week, the company divested the Coradia Polyvalent platform, its Reichshoffen production site in France and its TALENT3 platform to the Spanish company CAF.

The Zefiro V300 was a joint platform of the French and Japanese rolling stock companies, and will now fully be in the hands of Hitachi Rail.

Zefiro V300 high-speed trains run in Italy under the name Frecciarossa 1000. In September 2010, Trenitalia ordered 50 of the trains. Alstom will continue to honor its obligations under the existing orders for rolling stock from Trenitalia and ILSA to ensure a seamless transition. ILSA, a new high-speed operator that will start operations in Spain under the name brand Iryo has invested 1 billion euros in an initial fleet of 23 new Frecciarossa trains.

For Hitachi Rail, the transaction consolidates the company’s commitment to the very high-speed rail market, especially Italy’s Frecciarossa 1000, and reinforces the strength of the company’s service and maintenance capabilities.

Already in July 2020, the European Commission cleared Alstom’s acquisition of Bombardier, under four conditions. Alstom also has to supply legacy on-board ETCS signalling units and necessary interfacing information and support in favour of signalling competitors, as well as to the Dutch infrastructure manager, ProRail in favour of all interested operators.

This because the merged Alstom-Bombardier would otherwise have had the ability and the incentive to make it more difficult for other suppliers of ETCS on-board units to interface with its many already installed signalling systems. Closing of the merger transaction is now expected in the first semester of 2022.

this is so cool!