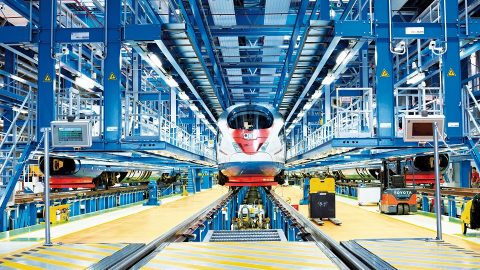 Siemens Mobility signed an agreement with the Russian Rail Engineering Centre to develop a new high-speed electric train for operation on the broad gauge high-speed lines in the Russian Federation. The Centre is a joint venture between Russian Railways and train builder Sinara.

Within the agreement, the Russian joint venture and Siemens will conduct technical consultations to develop the basic concepts for the first design of the new high-speed train. It will have travel speeds of up to 400 kilometres per hour, and will be built for the broad gauge of 1520 mm in Russia. The foundation of the project’s development will be laid, how the next design stages will be implemented will be agreed in future documents.

Earlier, Dmitry Pumpyansky, President of Sinara Group, said that the new train is expected to be completed by 2028. The trains will be produced in the Ural Locomotives plant, a joint venture of the Sinara group and Siemens. They will be designed by general requirements set by Russian Railways for the new Russian high-speed trains, as well as by the Russian and international standards currently in force. It is not yet announced where the 400 km/h train will run on the Russian network.

Siemens and Russian Railways have been working together for many years. They jointly developed and launched the Sapsan and Lastochka high-speed electric trains, which run in Russia.

“We are taking our long-standing and reliable partnership with Russian Railways to a new level”, said Albrecht Neumann, Managing Director for Rolling Stock at Siemens Mobility. “Our role is to support the Engineering Centre for Rail Transport, which is part of the RZD Holding, in the development of trains with uniquely optimised energy consumption and maintenance costs combined with maximum reliability.”