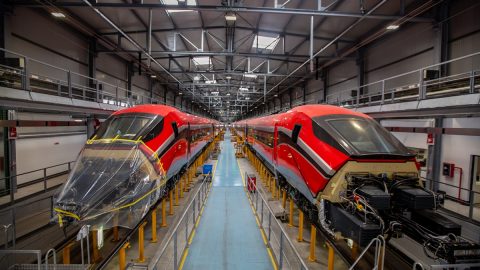 New Spanish operator ILSA has signed a 30-year agreement with Hitachi Rail for the maintenance of ILSA’s 20 new ETR 1000 trains. Train maintenance will include predictive and corrective activities.

The maintenance activity will be carried out at Hitachi Rail’s facilities in Spain and will create around 75 jobs. The contract between ILSA and Hitachi comprises 737 million euros, and covers a 30-year period until 2052. This continues the cooperation with the Japanese company which also delivers its trains, the contract of which was awarded in August 2020. ILSA will begin operations in the second half of 2022 and will connect Madrid, Barcelona, Valencia, Alicante, Seville, Malaga and Cordoba.

New company ILSA is a consortium between Trenitalia and Air Nostrum, a Spanish regional airline based in Valencia. Trenitalia already operates the same type of high-speed trains in Italy under the name Frecciarossa 1000. Ilsa and Hitachi Rail have a global agreement that can reach 23 trains, and initially 20 ETR 1000 trains have been ordered.

The first train of the new ILSA fleet is already in Spain undergoing homologation tests, and the second and third units are on their way to Spain and will arrive before the end of 2021. The trains are being manufactured by Hitachi Rail and Alstom (formerly Bombardier), partly in Hitachi Rail’s factory in Pistoia (Italy) as well as in Alstom’s factory in Trapaga (Vizcaya).

Each train has a length of 200 metres, capacity for 460 passengers and is capable of reaching commercial speeds of up to 360 kilometres per hour. The trains have more spacious seats, Wi-Fi with 5G connection and a bar area. ETR 1000s have been operating in Italy since 2015.

The new fleet has a high efficiency due to its state-of-the-art aerodynamics and its use of energy-saving technologies, claims ILSA. The eco-design principles contribute to ILSA’s commitment to having the most sustainable fleet and to Hitachi Rail’s decarbonisation strategy.