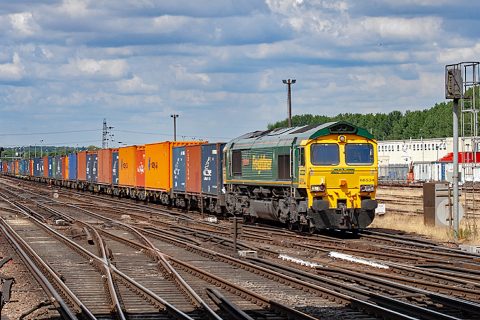 Published on 14-10-2021 at 10:30
No wires and maybe no emissions either. Class example 66534 with an intermodal train approaching Eastleigh (WikiCommons /Murgatroyd49)source: Wiki Commons

The shocking rise in electricity prices has sparked some rail freight operators into a startling scenario. Electric locomotives are to be stopped and operators will resort to diesel traction instead. This would pose difficult questions for the UK and devolved governments, who lay claim to a diversified energy generation policy. It would also drive a freight train straight through decarbonisation plans.

The UK operation of the global Genesee and Wyoming corporation – Freightliner – has been first to react. “As a result of soaring prices on the UK’s wholesale electricity market, the price Network Rail charges us to operate electric train services has increased by more than 210 per cent between September and October”, says their statement. “This unprecedented rise in electricity charges has resulted in a sharp increase in the cost of operating electric freight services. As a result, Freightliner has taken the difficult decision to temporarily replace electric freight services with diesel-hauled services, in order to maintain a cost-effective option for transporting vital goods and supplies across the UK.”

Electricity prices up 210 per cent

The UK operation of the global Genesee and Wyoming corporation – Freightliner – has been first to react. “As a result of soaring prices on the UK’s wholesale electricity market, the price Network Rail charges us to operate electric train services has increased by more than 210 per cent between September and October”, says their statement.

“This unprecedented rise in electricity charges has resulted in a sharp increase in the cost of operating electric freight services. As a result, Freightliner has taken the difficult decision to temporarily replace electric freight services with diesel-hauled services, in order to maintain a cost-effective option for transporting vital goods and supplies across the UK.”

As the largest UK freight operator of electric locomotives, Freightliner has sought to deploy more electric traction on routes to further reduce carbon emissions and improve the already green credentials of rail freight.  Rail freight, say Freightliner, in a statement echoed by the industry at large, is inherently a carbon efficient mode of transport. Even with a diesel locomotive, each tonne of freight moved by rail instead of road reduces emissions by 76 per cent.

Electric-hauled freight services can further reduce emissions by up to 99 per cent.  “Removing electric locomotives in the near term from our trains is contrary to our preferred strategy and at odds with the UK’s decarbonisation objectives; however, such high energy costs leave us no choice”, they say.  “We remain  hopeful that Network Rail and Government might find a solution that avoids pricing electric freight traction off the network and enables us to reinstate electric services.”

What has gone wrong?

The scenario of using fossil fuel motive power because the base energy is cheaper has met with derision from environmentalists. It is not something that has been contemplated for over a decade. Now, with electricity prices seemingly going ever higher, operators are rethinking their traction plans. Stabling electric locomotives would not only put a significant part of the national fleet out of action, it would have direct impacts on the timetable, and ability of rail freight to deliver. Some commentators are already saying this is a gun to the head of the government.

Worldwide, gas prices have been rising, as demand recovers from the pandemic. This has meant higher prices on the global spot markets. The UK position has been made more acute for a number of reasons. First, with coal taken out of the energy generation chain, the remaining fleet of power installations has been running at close to capacity. Diversified supply – from renewables and nuclear, and operations like the Drax biomass plant – are all at maximum output.

The only significant resource left is gas-powered generation, of which the UK has enough to keep the national grid supplied. However, gas storage is at a premium in the UK, and poor hedging by some companies (buying ahead of demand at a favourable price) has left the UK with no option but to buy at today’s inflated costs. That has caused all energy-intensive industries to look long and hard at their consumption figures and, in some cases, contemplate shutting down.

23 locos shunted off the rails

“Such a significant increase in the price of electricity cannot be absorbed by us or our customers at a time of wider supply chain challenges for the UK economy”, says Eddie Aston, the chief executive officer of Genesee and Wyoming UK/Europe operations, which includes Freightliner. “We regret that we have taken the decision to temporarily withdraw our electric locomotives from service. However, nobody benefits when such sharp spike in charges leads to low-carbon, electric locomotives being parked-up in yards.  We will continue to work with Network Rail and with Government to find a resolution that, in the short term, enables us to reinstate electric services, and, in the longer term, aligns charges and incentives with Government objectives.  Such alignment will enable further investments in low-carbon traction, deliver greater modal shift from road to rail and support the country’s journey to net zero”.

Freightliner operates 23 electric locomotives, with the recently re-engineered former express passenger class 90 locomotives taking pride of place. Along with older class 86 models, they represent around ten per cent of the company’s fleet. Most other operators have yet to make their plans known. DB cargo, however, already say they will not be altering the mix of their traction fleet at present.

Unions have been quick to criticise the situation. The RMT has warned that the electricity price hike threatens to “destroy rail freight and jack up dirty diesel use.” It is huge embarrassment for the UK government with the climate change COP26 conference in Glasgow just one month away. “As COP26 approaches the Government have to step in to stop this carnage on our railways”, said general secretary of RMT, Mick Lynch. “With the road haulage industry already in turmoil, and with the threat of empty shelves this Christmas, we should be encouraging the use of rail freight not battering it into submission with electricity charges that will add millions of pounds to rail freight companies’ bills, with one operator reporting an eight million pound [9 million euro] increase in costs.

The UK supply chain is already under severe strain. Road haulage companies have struggled to find drivers, and shops have had gaps in their shelves. During the pandemic, the rail fright industry was repeatedly hailed by the government as a saviour, for keeping food and essential supplies distributed. Coming on the back of the pandemic, the lockdown, and the petrol and diesel supply issues, the UK government has been roundly criticised for their handling of this latest crisis. If that really is the case, then not just the economy, but the environment stands to suffer too, giving Boris Johnson a red face in Glasgow next month.

Network Rail has a long term contract for electricity supply signed in 2013 with EON, and this fixed the long term price of electricity to train operators.

Freightliner say “As a result of soaring prices on the UK’s wholesale electricity market, the price Network Rail charges us to operate electric train services has increased by more than 210 per cent between September and October”.

Is this because Freightliner chose to use electricity from the wholesale market?