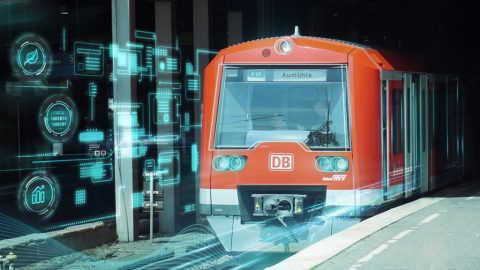 Hamburg starts trial with Automatic Train Operation on the S-Bahn

Last Monday, a trial started in Hamburg with four automatic trains on the S-Bahn. These trains are equipped with Automatic Train Operation (ATO) and will run the coming days on the S21 line between Berliner Tor and Bergedorf/Aumühle stations.

The train is fully automated but there is a train driver on board as a supervisor. Shunting will be done without on-board personnel. The project partners DB, Siemens Mobility, and the City of Hamburg have invested a total of 60 million euros in the digital S-Bahn Hamburg, which is part of DB’s Digital Rail Germany project.

The digital S-Bahn had its premiere run at the opening of the Intelligent Transport Systems World Congress (ITS) in Hamburg. During the congress, four digital S-Bahn trains operate automatically along the 23-kilometer section of S-Bahn Line 21 between the Berliner Tor and Bergedorf/Aumühle stations.

Plans to digitalize the entire S-Bahn rail network by the end of the decade are already under way, and investments in trains and infrastructure are being made. The technology is also projected to be used nationwide for regional and mainline rail systems.

From 11 until 15 October 15 companies from around the world are presenting their innovation a the ITS World Congress in Hamburg. Deutsche Bahn is highlighting innovations in rail infrastructure, train stations, mainline and commuter transport, and mobility interconnections.

Just last year, DB and the city of Hamburg extended their 2017 smart city partnership for a further five years. Both partners plan to use digital technologies and innovative ideas to make local public transport and train stations more attractive for customers. This trend can already be seen at the Dammtor train station. Improved displays with new train information and innovative routing guidance provide orientation for all travelers and congress guests.