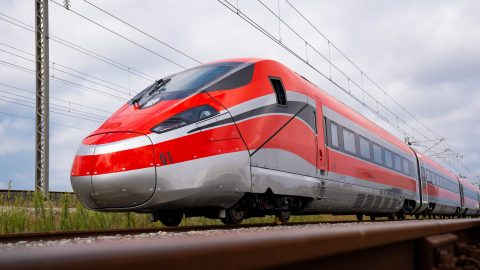 New Spanish high-speed operator ILSA started the process of homologation of their brand new fleet. The first ETR 1000, out of a fleet of 20, began the first stage of the process on the Figueras-Perpignan line.

The start of operations of new operator ILSA in Spain in 2022 is coming closer, but first, it needs to be certified that the trains can enter the railway network. In the homologation, it is checked if the trains, of the type also known as the Frecciarossa 1000, match the specified criteria in Spain. The process is required of all the vehicles of the Railroad Network of General Interest.

ILSA plans to start its operations in the second half of 2022 and will represent 30 percent of the high-speed market in Spain. The company will connect Madrid, Barcelona, ​​Valencia, Seville, Zaragoza, Alicante, Córdoba and Malaga in a first phase. Later on, the operator aims at more routes in Spain, as well as operations in other European countries.

The Figueras-Perpignan section, in which homologation began, covers 44.4 kilometres. It is the so-called ‘international section’ and complies with all the technical specifications of European railway interoperability, connecting Spain with France and with the rest of Europe.

After completing a first test period in this section, the train will continue the process on the Barcelona-Madrid, Madrid-Valencia and Madrid-Seville lines. Before the end of the year, ILSA expects another two trains that will also participate in the homologation process.

The first ETR1000 model of the company left the factory in Pistoia, Italy, this summer. It is an interoperable model in different European countries, equipped with the European train control system ETCS. The train is 200 meters long, has capacity for up to 467 passengers and can reach commercial speeds of up to 360 kilometers per hour. It its also the first high-speed train in the world to have obtained an Environmental Product Declaration (EDP). This measures the environmental impact to be 28 grams of CO2 per passenger and kilometre, and 95 percent of its materials being recyclable.

ILSA has invested 1 billion euros in its initial fleet of completely new trains developed by Hitachi Rail in collaboration with Bombardier Transportation (now Alstom group). Manufacturing took partly place in Italy and partly in Spain. Specifically, its propulsion systems were carried out in its entirety at the Bombardier plant in Trápaga (Bizkaia), while its assembly and fine-tuning happened at the Hitachi Rail factory. in Pistoia, near Florence.

ILSA is a private company, and the first high-speed operator in Spain for which is the case. One of the shareholders however is Trenitalia, part of Italian State Railways. Other shareholder is Air Nostrum, a Spanish regional airline based in Valencia.