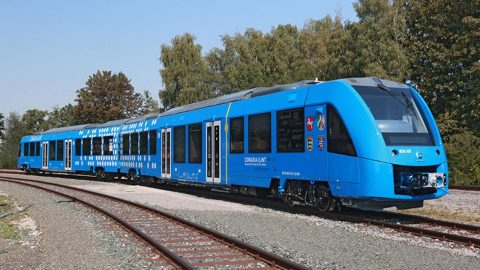 Alstom’s Coradia iLint hydrogen train has made its Swedish debut in Östersund. On Wednesday, Alstom teams have presented the train to a variety of local stakeholders, including regional operators, transport authorities, government decision makers and media.

Designed specifically for use on non-electrified lines, the Coradia iLint enables sustainable train operations. According to Alstom replacing one diesel regional train with one hydrogen train will reduce the yearly CO2 emission equivalent to 400 cars.

Despite many electrification projects in several European countries, a significant proportion of the continent’s rail networks will remain non-electrified for the foreseeable future. Coradia iLint uses the existing infrastructure without the need to invest in electrification.

Alstom is a large player on the Swedish railway market, with over 1.000 trains delivered. The company is also holding several large maintenance contracts and is offering maintenance in 19 local depots, including depots in Motala and Västerås specialising in heavy maintenance and refurbishment. The company also leads the ERTMS1 rollout in Sweden both onboard and trackside and is delivering the new standard national traffic management system for Trafikverket.

In 2016 the Coradia iLint was launched, a CO2-emission-free regional train. The first two H2 iLint trains entered commercial service in 2018 in Germany and have already covered more than 100.000 kilometers. To date, 41 trainsets have been ordered in Germany, and successful trials have taken place in Austria and in the Netherlands. In Italy, the operator FNM confirmed an order for 14 H2 trains at the end of 2020.