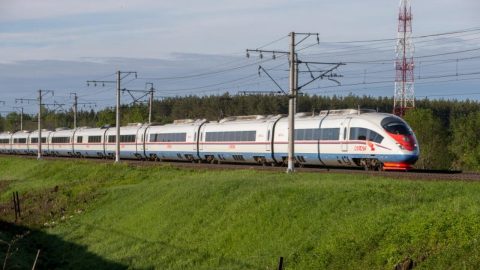 The first Russian High Speed Railway (HSR) between Moscow and Saint Petersburg will be integrated with the the city train services of the Moscow Central Diameters (MCD). Four hubs for the high-speed train will be created in the city. Moscow Central Diameter has shared new details about the high speed line in an update.

The launch of the high speed line that is expected for 2027 will bring a record in the travel speed between the two Russian capitals. The travelling time between the cities will be reduced to 2 hours and 30 minutes. The high speed line will be integrated in the Moscow Central Diameters, city train services on existing commuter rail lines in Moscow and Moscow Oblast, Russia.

Historically, all the stations except Vostochny railway station in Russia are located in the city centre, but not all passengers need to go there. As the transport arteries inside the city are overloaded, it is difficult to leave the city.

Passengers arriving from Saint Petersburg will be able to transfer to other transport modes such as the metro, the Moscow Central Diameters and buses. Depending on their destination, they will choose the right hub from which they will be able to get directly to an airport, a bus terminal or, for example, a park.

“We continue developing the idea of the maximum free passenger movement on public transport. New routes, services, transport hubs that combine different types of transport are all important components of large cities so that residents or tourists can build flexible routes depending on their needs.”

“In Moscow agglomeration we will make hubs for the HSR trains. Passengers will have freedom in choosing more convenient interchanges to Moscow urban transport”, says Maksim Liksutov, the Deputy Mayor of Moscow for Transport.

Over the last 10 years, the passenger flow of the Moscow – Saint-Petersburg direction has grown by 64 per cent, in particular, high-speed transportation – flights and Sapsan train trips. It is considered the most popular destination among tourists.

The connection between these two cities is expected to be popular among foreign guests and  Russian citizens. The expectation is thay daily tens of thousands of people will use the high speed line. It will create an absolutely new agglomeration, which will unite 6 subjects of the Russian Federation: 4 regions (Moscow, Tver, Novgorod and Leningrad regions) and 2 cities (Moscow and St. Petersburg).

Moscow (12,6 million residents) has grown by several times and has become one of the largest megacities in the world. Annually the Government makes a great contribution to the development of the city so that residents can live comfortably, calmly and conveniently. Public transport is an integral part of the life of Moscow citizens.

The Moscow Central Circle was launched in Moscow in 2016 and in two years two diameters – D1 and D2 – were launched. The goal of these two projects is to create hundreds of new routes for citizens, so it will be faster and more comfortable for them to move around the city. 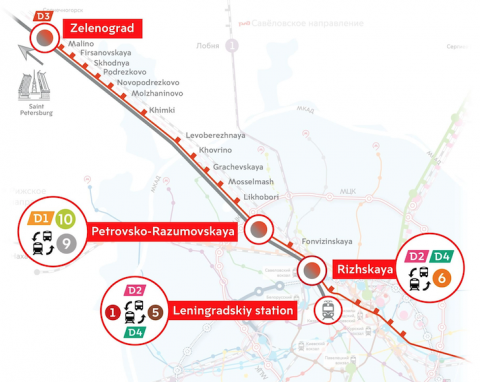 In comparison, in Spain the old central terminals of the major cities were given for the high-speed transportation. However, there are stations not only in the center, but also on the outskirts, like in Antequera. From the city to the high-speed railway – 15 km. In China, the main factor determining the cost-effectiveness of the high-speed rail transportation is the saving of passengers’ time (especially for those who have preferred the high-speed lines over the conventional railways and the other modes of surface transport) and cost savings for transport operators.

The HSR will set a new record in the travel speed between the two Russian capitals. The high-speed train Sapsan is the fastest way to get to St. Petersburg from Moscow as it takes only 4 hours. However, with the HSR launch the travel time will be reduced to the 2,5 hours. The route length will be 680 km. The maximum developed speed will be 400 km/h.

The launch of the D1 and D2 have improved accessibility for more than 4 million people living in 45 Moscow districts and 6 Moscow regional cities. The MCD consists of 60 stations with 21 interchanges. Paying for travelling becomes simpler. Passengers used to buy a separate ticket, and now there is a single payment system for all modes of public transport. The headway between trains does not exceed 7 minutes at peak hours.

The launch of the future D3 is planned in 2023. It will connect the two Moscow districts – Zelenograd and Ramenskaya. The new Diameter will include 43 stations and its length will be 82 kilometers.

The D4 is scheduled to be launched in 2023 and D5 in 2025. Completion of the Big Circle Line is planned for 2022. The total length will be 70 kilometers, it will include 31 stations and it will also provide interchanges to all radial metro lines, MCC and MCD.