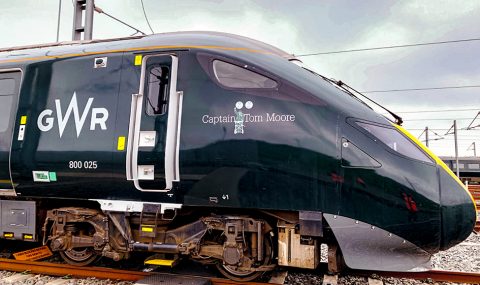 Services on two of the busiest and most prestigious routes in the UK were suspended at the weekend. Serious faults were found in the suspension systems of a fleet of Japanese-built trains that serve two busy routes. Trains between London and Scotland; and London and Wales and the West of England; were cancelled en-masse. A metal fatigue problem was identified, which compromised the critical wheel bogie suspension system.

The East Coast Main Line (ECML) – operating from London King’s Cross station; and the Great Western Main Line (GWML) out of London Paddington, were both effectively suspended on Saturday, with ongoing mass cancellations. Passenger services were thrown into chaos. LNER, the government-backed operator on the East Coast Main Line issued an urgent message to all prospective passengers, urging them not to travel under any circumstances. The common fleet of trains operating on both lines, were found to have defects in their suspension system. Operators on both lines were required to put in place an immediate withdrawal from service. The fault affects over 1000 vehicles formed into almost 100 trains.

Hairline cracks have been discovered in the suspension system of the 800 series trains. RailTech.com understands the problem lies in an aluminium bracket which secures the wheel bogie to the chassis of the units. Failure here would of course be a critical safety issue. The discovery during routine maintenance, necessitated the immediate withdrawal of the fleet, pending further inspections.

The impact was a huge disruption to the network on Saturday, with cancellations and delays expected for an extended period. The national news coverage brought forward several experts, who believe the problem will not be easily solved. There is the unhappy prospect of ongoing cancellations, short formations and speed restricted operations for some time to come.

The government – which directly operates the East Coast Main Line under the shadow ‘LNER’ brand, made a public plea to passengers not to travel on Saturday, and posted multiple cancellations on its website. Their brief message was restricted to: “This is due to a problem under investigation”. Hull Trains, an open access operator on the same route, who recently resumed services using the same model of train, offered the same message, with additional information requiring passengers to re-route via Sheffield and use Midland Main Line trains to London.

Passengers on GWR – the operator in the West of England and South Wales may have been annoyed to turn up at London Paddington, unaware of any disruption. A message was rather inconspicuous on the company website, but gave a little more information than the East Coast companies. “Due to more trains than usual needing repairs at the same time at London Paddington fewer trains are able to run on some lines”, they said. “Train services running to and from this station have been cancelled. Owing to the short notice unavailability of carriages which form our High Speed train services there will be no train service or only an extremely limited service with no alternative means of transport available.”

Replaced much loved but outdated ‘125s’

Commonly known as the 800 series, the Hitachi built units serve London and Bristol and Cardiff via the West of England Main Line out of London Paddington. Formations with a slightly different configuration run from London King’s Cross to serve the North East of England and Edinburgh and the north of Scotland. The units replace the almost fifty-year old “High Speed Train” sets – popularly known as the InterCity125 – a 1970s British design that still holds the record as the fastest diesel train design in the world.

The so-called Inter City Express fleet has been controversial since even before introduction. The cost of the trains was called into question and the sourcing overseas was deeply criticised in the UK parliament. Many politicians called the procurement “the wrong trains at the wrong time, for the wrong price”. Criticism has also been made of the passenger comfort of the 800 series, with customers complaining of uncomfortable seating, poor configuration and lack of luggage space. Embarrassingly, a VIP demonstration run from Bristol was halted by an air conditioning fault that sprayed guests with coolant shortly after departure.

Many of the units were re-engineered before delivery, due to a government decision to halt an electrification programme in the West of England and Wales. Units were re-ordered with bi-mode electro-diesel capability, so they could operate deeper into the south west of England and South Wales. The move was highly criticised as environmentally unfriendly, and added massively to the cost of the fleet. Units cost almost 3 million GBP per carriage (3.3 million euros) making them by far the most expensive trains ever to run in the UK.

Passengers in the West of England have also criticised the configuration of the sets, which are effectively two coupled units, generally of five cars each. The formations, while operationally expedient, offer no access to the adjoining set – causing pre-pandemic crowding problems. The East Coast formations are of a single nine-car set.

Although built in Japan by Hitachi, some assembly work on the units took place at Newton Aycliffe near Durham in the UK. The multi-national aspect of the construction can only complicate matters in resolving the issue.

How soon will you be able to access the Failure Investigation Report for these Cracks in the aluminum Welded Body of the Railway Vehicles? Several Technical Issues arise… How many Hours of Commercial Service did the Rail-Vehicles operate for? How far were the Welds away from the Cracks? Who certified the Original Eqpt? Was EN15085 applied?