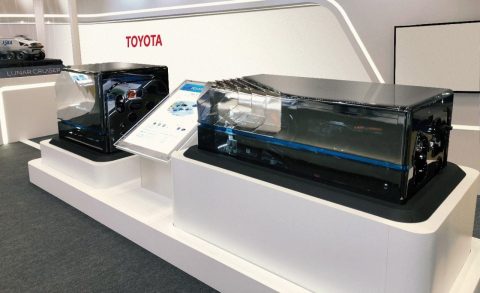 Toyota Motor Europe will supply and integrate its fuel cell modules into the zero-emission prototype train that is to be realised by the EU FCH2RAIL project. A consortium made up of partners from Belgium, Germany, Spain and Portugal is developing a new train with a hydrogen-electric bi-mode propulsion system, which can switch between catenary and on-board hydrogen power.

The FCH2RAIL project started in January, and until now has already defined the reference routes and operational scenarios for the prototype train. At the heart of the project is a hybrid bi-mode propulsion system. The train will use the energy of the catenary when it is available. When it runs on tracks without a catenary, it is powered from the hybrid module made up of fuel cells and batteries. The project should lead to a modular Fuel Cell Hybrid PowerPack (FCHPP) fit for use in different rail applications, such as multiple unit, mainline and shunting locomotives. It will also be suitable to retrofit existing electric and diesel trains.

Toyota will deliver the fuel cells for the prototype train. “We take this opportunity to work in the consortium to transfer our fuel cell technology to another type of hydrogen applicatio”, says Thiebault Paquet, Head of the Fuel Cell Business Group from Toyota Motor Europe. “Hydrogen has an important role to play in the decarbonisation of European railways”.

Currently, many railway lines in Europe are being electrified with catenary, a very expensive and long-term project that depends on local geographical conditions. There is the alternative of trains powered exclusively by batteries, but their operational autonomy is limited (from 30 to 70 kilometres), depending on the profile of the route and the outside temperatures. Today’s diesel trains provide inferior performance in terms of top speed and acceleration compared to trains powered by electric motors fed from the catenary.

“With the project, we want to demonstrate that this type of dual-mode train constitutes a competitive and environmentally friendly alternative to diesel train,” says project coordinator and researcher Holger Dittus, from the German Aerospace Center.

Best of both worlds

The on-board power supply system is designed in such a way that its power and autonomy can be extended according to a modular principle: The number of fuel cells and batteries affects the propulsion power, while the number of hydrogen tanks determines the autonomy operating on non-electrified lines. Therefore, the capacity of the system can be adapted for use in both passenger and freight transport.

“Our bimode hybrid fuel cell and battery system combines the advantages of both technologies, being able to use both the energy of the catenary and the energy on board. This allows us to achieve an even more sustainable and energy efficient rail transport”, says the technical manager of the project Sergio Gascon, of Construcciones y Auxiliar de Ferrocarriles (CAF), summarising the main objective of the projects. With a budget of 14 million euros, the project plans to develop, test and standardise the system in the next four years. The project is financed with 10 million euros by the FCH 2 Joint Undertaking.

To understand the impact of this system on the environment, the plan is to convert a CIVIA electric commuter train (manufactured by the Spanish constructor CAF), integrating in it the hybrid module of fuel cell and batteries. The Spanish public railway operator Renfe will supply the rolling stock. It will test the system from production to its end of life through its use, and to evaluate its performance in real conditions.

One of the basic components of the autonomous power system are the fuel cell modules supplied by Toyota Motor Europe (TME), while the batteries and power converters will be supplied by CAF. The initial functional tests and test routes will be carried out on Spanish and Portuguese roads with the support of the infrastructure managers, the Administrator of Railway Infrastructures (ADIF) and Infraestructuras de Portugal (IP). The Spanish research center Centro Nacional de Hidrogen (CNH2) has been entrusted with the construction of the hydrogen refueling station and the tests of the hybrid fuel cell and batteries module, prior to its integration into the train.

Prior to the first test runs, the international project team still has to solve a number of technological challenges: The design must allow the control and combination of the fuel cell and battery modules so that the system meets all requirements and can be implemented efficiently. On the other hand, this efficiency can be increased by efficiently harnessing the waste heat from the fuel cell modules for heating and air conditioning the train. As part of the project, air conditioning manufacturer Faiveley / Stemmann Technik (STT) and DLR are investigating innovative solutions to reduce energy demand in heating, ventilation and air conditioning (HVAC).

The project also analyses regulations and standards in the fields of hydrogen and rail transport, with the aim of guaranteeing a safe integration between hydrogen technology and the catenary at all times. Taking all this into account, the project team is developing proposals so that the competent authorities can more easily homologate these types of trains throughout the EU in the near future. 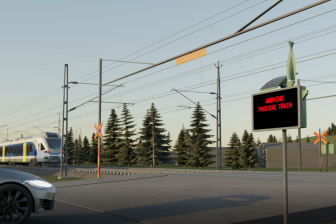