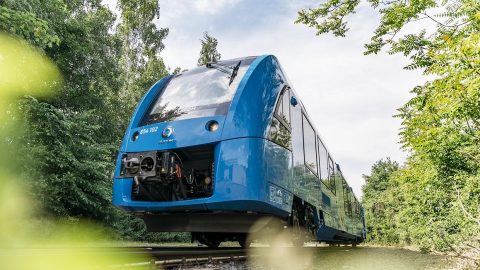 French train manufacturer Alstom sees great market potential for hydrogen trains. In Western Europe alone, 5,400 diesel engines have to be replaced. After multiple test drives and small-scale use in commercial service in Germany, the Coradia iLint will go into serial production in 2021.

Alstom sees itself as the world leader in the development of fuel cell powered rail vehicles and wants to further expand this position in the coming years, vice president Regiozüge Brahim Soua told Handelsblatt last weekend. “We want to be the leader in zero-emission drives.”

Alstom’s development center is located in Salzgitter, Germany, where Coradia iLint hydrogen trains have been built since 2014. The first iLints went in to passenger service in Lower Saxony, Germany in 2018. Recently, the Austrian Government also approved the hydrogen train for operation.

The orders of the hydrogen train include the delivery of 41 vehicles for two regional transport companies in Lower Saxony and Hesse as well as six trains plus an option for a further eight to an Italian rail operator. In Germany, the zero-emission trains have a lot of potential. Only 10,000 kilometers of the 33,000-kilometer railway network has been electrified. In addition, many diesel engines will have to be replaced in the coming years

The Netherlands has also shown interest in sustainable trains. As part of the feasibility study, test runs with a Coradia iLint hydrogen train were carried out in March of last year between Groningen and Leeuwarden. In September 2020, Groningen announced that it wanted to use hydrogen trains on the railways in Groningen by 2024.