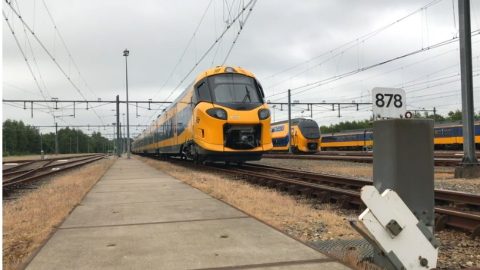 Dutch railway operator Nederlandse Spoorwegen has received the first Intercity Next Generation train. It will be tested on several routes across the Netherlands. This type will be introduced on the Dutch network starting from 2021.

The first ICNG train entered the Netherlands in the early morning of 4 June. It arrived to the country from Poland where Alstom’s manufacturing facility is located. Nederlandse Spoorwegen (NS) in partnership with ProRail and Alstom will test the new train in the northern part of the Netherlands for several weeks. Afterwards, the five-carriage vehicle will be examined on the Schiphol – Antwerp high-speed railway. Initially, the tests will be performed at the nighttime and without passengers. The next stage includes the day journeys with passengers onboard. It is worth to remind that the ICNG train has already been checked on the Velim railway test circuit in Czechia.

NS ordered 97 ICNG trains from Alstom. 79 vehicles will be supplied in 2021-2022, according to the deal concluded in July 2016. The other 18 units were booked by NS in August 2019. They will appear on the Dutch network only in 2025. Alstom will manufacture the ICNG trains at the Polish facility in Chorzów, close to Katowice.

The new type of NS rolling stock will be delivered in the five- and eight-carriage formations. 20 trains will be multisystem for operations on cross-border Schiphol – Antwerp high-speed route. With the help of the ICNG vehicles, NS plans to replace the old push-pull trainsets and to increase its seat offer. Besides the high-speed line, the Dutch company plans to use the new trains on the conventional routes and the Hague – Eindhoven corridor.